RNH remains the key to the Oilers power play 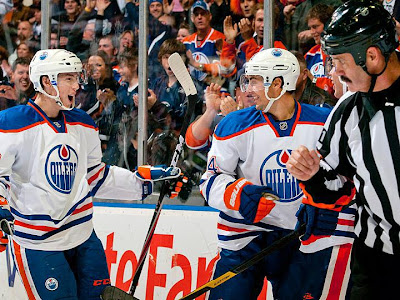 Prior to the start of the 2011-12 campaign, the Edmonton Oilers had gone five consecutive seasons with what was essentially a bottom third National Hockey League power play. Not surprisingly, that all changed with the arrival of Ryan Nugent-Hopkins. Edmonton put together the league's third best power play during the former first overall pick's rookie campaign and followed that up with an eighth place finish in 2013.

All this despite the kid playing with a bad shoulder for much of his first two season in the NHL. With the likely additions of Anton Belov, Denis Grebeshkov and David Perron for the coming 2013-14 season, the Oilers power play could turnout to be something pretty darn special but the key still remains #93.

Here are the names that rookie head coach Dallas Eakins will have at his disposal, when it comes time to put together Edmonton's power play for the coming season.

Most would be surprised to see Smyth's inclusion on this list but with the departure of Shawn Horcoff to the Dallas Stars, the Oilers will need to look at seriously adding another net presence on the man advantage. There is a good chance Perron will take on that role, meaning the previous go to trio of Hall-RNH-Eberle, may no longer be kept intact. That being said, last year's PP seemed to be at its worst, when Horcoff was hurt and after Eberle was moved to the second unit.

If Hemsky remains in Orange and Blue for '13-'14, the top unit could feature the quintet of Eberle or Yakupov with Hall, Nugent-Hopkins, Perron and Schultz. Leaving Eakins with a second unit that would feature one of #14 or #64 playing alongside Gagner, Hemsky, with two of Belov, Grebeshkov or Petry manning the points.

However, should the veteran Czech winger find himself in a different NHL city before the start of the season, all bets are off. They could decide to simply slide Smyth into Hemsky's role but a more likely scenario could see them moving a forward off the top line and going with a more traditional setup on both units.

Regardless of the route the club decides to go, Nugent-Hopkins remains the key. He was tied for seventh in the league with 20 power play assists in his rookie season and did so playing just sixty-two games. Only Claude Giroux and Brian Campbell were better from a power play assists per game average and that was with a supporting cast that is nowhere close to what #93 will have at his disposal for the coming season.

With what should be a structurally sound shoulder, is it so far fetched to think Ryan Nugent-Hopkins could be among the very best power play producers in 2013-14? In my mind, he is more than capable of pulling off exactly that and in turn give the Oilers one of NHL's most feared power plays. With Schultz and Yakupov both having a year of experience to lean on and the rest of the group being a year older, RNH could very well produce at an even higher level than he did during his rookie campaign.

Should that happen, Edmonton will be in the playoff hunt and quite possibly, end their string of seven consecutive years without making a post-season appearance.
Posted by Oil Drop at 3:18:00 pm