Oilers with yet another poor showing on home ice 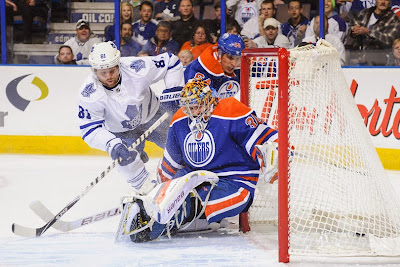 On the strength of a rather impressive four point performance from Phil Kessel, the Toronto Maple Leafs simply outclassed an undermanned and struggling Edmonton Oilers side on Tuesday night at Rexall Place, cruising to an easy 4-0 win.

James Reimer stopped 43 shots in earning his first shutout of the season but wasn't called upon to make many of those stops until this one was all but over. Randy Bachman made his second consecutive start and home-ice debut for the Oilers, stopping 22 shots on the night but in the end it mattered little, as the Leafs were by far and away the better team on the night.

Kessel wasted little time in putting Edmonton behind the 8-ball, scoring all of a 1:08 in, after an ill-timed pinch from defenceman Anton Belov sent the Maple Leafs in on an odd-man rush. Nazem Kadri made a great play along the sideboards to spring Toronto's top goal scorer in on a partial break who made no mistake, sliding home his eighth of year under Bachman for the early advantage.

The early marker seemed to set the tone for what would be a wide open first period, with both teams exchanging chances and treating the fans at Rexall Place to bit of high tempo action. Edmonton starting tender made a pair a clutch stops down low off Leafs winger Joffrey Lupul to keep his team within striking distance, while Reimer would rob Nick Schultz from the slot in the dying seconds of the period, sending Toronto to the intermission with the one goal cushion intact.

Bachman would be called upon once again in the opening minute of period two,  taking what looked to be a sure goal away from centre Dave Bolland with lunging stop. Unfortunately for Oilers, their goaltenders luck was about to run out, as the Leafs would stretch their lead to a pair, just under thirty seconds later.

Defenceman Justin Schultz jumped into the rush and was handed a wide open look courtesy of a nifty little feed from Sam Gagner but the talented blueliner was denied by the goal post, instantly trapping himself and the trio of Jordan Eberle, Gagner and Nail Yakupov in behind the play. The Maple Leafs would use yet another odd-man rush to their advantage, as Kessel found a streaking James van Riemsdyk and the big man chipped his six of the year up and over an outstretched Bachman to make it a 2-0 game.

From that point on, the Oilers started to hang their heads and Toronto just kept coming. They would be rewarded for their persistence with their third goal of the night and second of the period at the 8:42 mark, after yet another gorgeous finish from the Leafs top marksman. Kessel would pickup a loose puck below the Oilers goal line and in one quick motion, fire a shot top shelf over a startled Bachman to make it 3-0 for the visitors. The finish was absolutely exquisite and pretty  much put this one to bed.

Edmonton came back with a solid third period, badly outshooting the Leafs 19-5, but by that time Randy Carlye's crew had in cruise control. Despite peppering Reimer over the final twenty minutes of play, the Oilers were unable to get one past the twenty-five year old native of Morweena, Manitoba.

Toronto would put one final nail in the Oilers coffin to make it 4-0, as Kadri would deflect home his fifth of the season after an egregious turnover form defenceman Jeff Petry led to what appeared to be Morgan Rielly's first NHL goal. Upon further review, the youngster's shot on goal was deemed to have deflected off Kadri's body before between sailing pass Bachman and into the back of the net.

At the end of the night, Edmonton held a massive advantage on the shot clock 43-26 but this one was never really close after what was a very entertaining opening frame of hockey. The win moved the Toronto Maple Leafs into top spot in the Eastern Conference with a 9-4-0 record and 18 points on the season. While Edmonton continues to struggle, dropping to 3-9-2, which leaves them in the basement of the Western Conference.
Posted by Oil Drop at 9:40:00 am