Draisaitl it is...now send him back to Prince Albert 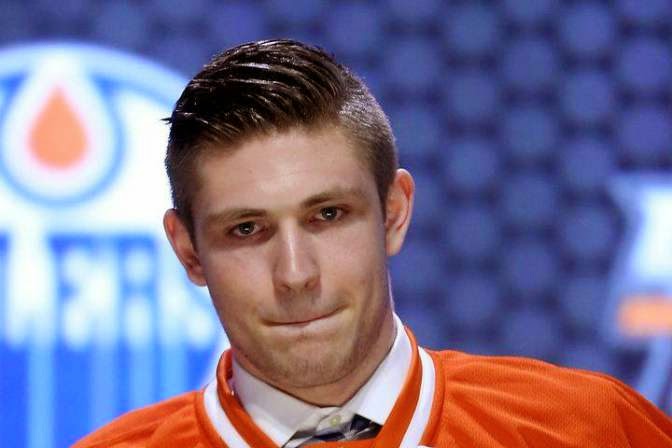 The Edmonton Oilers surprised absolutely no one with their selection of Leon Draisaitl with the third overall pick of the 2014 NHL Entry Draft. The only way on earth Craig MacTavish wasn’t going to call the Prince Albert Raiders centre’s name when he stepped up to the podium was if Barrie Colts defenceman Aaron Ekblad fell into their laps.

That never happened and the Oilers organization could not be happier. There is no question they wanted to add a “big centre” into their stable of young talent but passing up on a kid like Ekblad would have been next to impossible and lucky for them, it was a decision they were never forced into making. Clearly they got their man but one can’t help but wonder what will come next for both the organization and the big German pivot.

To suggest Edmonton is desperate to add a player with Draisaitl’s attributes would be an understatement but if they are smart, MacT and company will resist the temptation of rushing this kid into “The Show”. While he may already stand 6’ 2” tall and weigh somewhere in the neighbourhood of 215 pounds, how does thrusting him directly into the National Hockey League benefit the player in anyway shape or form?

Draisaitl is coming off an impressive 105 point campaign in which he scored 38 goals and carried a rather underwhelming Prince Albert roster into the Western Hockey League playoffs. His talent is undeniable but playing an 18 year old kid in a top nine role, on a roster which currently has zero insulation for their young players, makes little to no sense.

In all honesty, what purpose would it serve? If the plan is to see the youngster lose his confidence because of his lack of production or worse yet, have him pickup an unnecessary injury early in his career, than by all means have him start the 2014-15 season in Edmonton. However, if the long-term vision is to have Draisaitl turn into a dominant top six forward...allowing him the opportunity to make the jump with another year of development under his belt would not be such a bad idea.

There have been some questions raised about his consistency, which is not exactly uncommon for most teenagers, and the defensive side of his game. To his credit, the youngster has readily admitted to needing more work in his own end of the rink but doing so at the pro level is rarely if ever a good idea. Again, would it be so bad to have him work on his shortcomings in Prince Albert, while watching him pile up a ton of points and hopefully score a few more goals? In my mind, this should really be a no-brainer.

Don’t get me wrong, I have no doubt Leon Draisaitl could make this team out of camp...just not in the role he should be used in. This lineup needs an injection of quality NHLers not an infusion of more youth. This organization has to stop laying everything at the feet of the kids and just hope for the best.

Focus on getting Taylor Hall and company some immediate assistance and let the likes of Darnell Nurse and Draisaitl continue to do their thing in junior hockey and make their eventual debut as part of what will hopefully be a far better roster.
Posted by Oil Drop at 10:25:00 pm