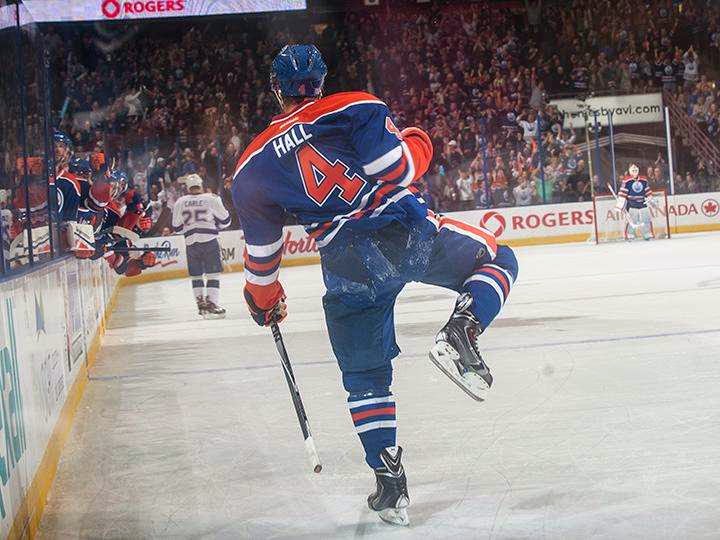 While it is hard to blame fans or media who do not watch the Edmonton Oilers on a regular basis for lumping all of the organizations continual failures into one rather large basket, the inclusion of Taylor Hall in any such discussion is downright perplexing.

By no means is he a perfect player but unlike rest of his teammates, the former 2010 first overall pick has found a way to not only continual improve from season to season but also morph into one of the very best players in the game. Unfortunately for him, playing in Edmonton on a team that regularly finds itself in the bottom of the National Hockey League standings has inexplicably led to his name being absent from the conversation when it comes to the top players in the league.

Even with the Oilers limping out of the gate to start the 2014-15 campaign, Hall has maintained the point a game pace he has produced in each of the last two seasons with a four goals and a pair of assists in six games. He has without question been the Oilers best forward in each and every one those outings, this despite being physically punished on a nightly basis by the opposition.

While linemates Jordan Eberle and Ryan Nugent-Hopkins delivered what was easily their finest performance of the young season during last night’s 3-2 win over Steven Stamkos and the Tampa Bay Lightning, it was the guy wearing the No. 4 on his back that was once again driving the play, while being the best player on the ice for either side. And yet when it comes to the mass media out east, we are now entering the third year of rarely if ever hearing his name mentioned in the conversation with the best of the best.

Now many will point to the Oilers lack of success as the reason why he is rarely mentioned but who is kidding who. If he played in the Eastern Conference or better yet, wore the Blue and White of the Toronto Maple Leafs, does anyone honestly believe for minute he would not be looked to as a budding superstar? Over the previous two seasons, the only players who have amassed more than the 130 points Hall has collected are Sidney Crosby (160), Ryan Getzlaf (136), Alex Ovechkin (135), Claude Giroux (134) and Phil Kessel (132).

Not too shabby and even more impressive when one takes into consideration only Crosby (1.38) and Getzlaf (1.12)have averaged more points per game than Hall’s total of 1.08. Now injuries to the likes of Stamkos and John Tavares have played a role in those two also not being on that list but that doesn’t change the fact that at the age of twenty-two, the Oilers best player has already cemented himself a spot alongside such an impressive group.

Anyone that watches Edmonton play on even a semi-regular basis knows exactly just how good this kid is and how engaged he is on nightly basis. While this season may only be only a couple of weeks old, it looks as though Hall has taken his game to that next level and is no longer allowing outside issues distract him. There is no bitching at the referees when he doesn’t get a call on the ice and his body language has been extremely positive, despite all the losing.

As previously mentioned, teams have clearly targeted him as the player in the Oilers lineup they would like to physically work over but so far, he hasn’t been slowed down one bit by the extra attention. If anything, it has almost had the opposite effect and made him even more focused and determined for the remainder of the game. People tend to forget just how young he is and the fact he has absolutely zero veteran support around him to help carry the load and yet there he sits among the top scorers in all of hockey.

With their roster currently constructed in the manner which it is, trying to predict just how many games the Edmonton Oilers could win in 2014-15 is almost next to impossible, however expecting Taylor Hall to finish the year with somewhere in neighbourhood of forty goals and ninety points isn’t much of a reach. He may not be a “generational talent” but he is certainly one of the premier players in the NHL and he has only started to scratch the surface.

Kudos should be given to likes of Elliotte Friedman, who has gone out of his way in praising the young Oilers star for his play this season but unfortunately the Rogers/Sportsnet Insider has been one of the very few paying attention. Now if only the masses out east would do themselves a favour and follow Mr. Friedman’s lead, maybe this kid will finally start getting the recognition he deserves.
Posted by Oil Drop at 5:40:00 pm