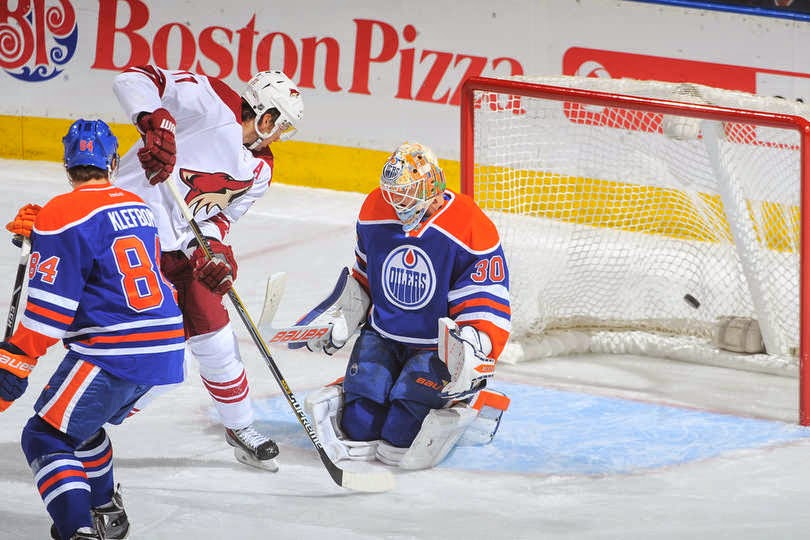 There is nothing quite like going into the National Hockey League Christmas Break with a bang or at the very least…a rather noisy thud. As if the Edmonton Oilers 2014-15 campaign wasn’t already tough enough to take, last night’s 5-1 loss to the Arizona Coyotes was a little extra special.

With exactly one win in their last twenty games, this addition of the Orange and Blue are turning out to be a fairly “special group” when it comes to finding ways to lose hockey games. As ugly as their 1-17-6 record against Western Conference opponents may look, it becomes even more disturbing when one comes to the realization that five of those defeats have come at the hands of Dave Tippett’s underachieving side.

To make matters worse, former Oilers netminder Devan Dubnyk has now gone a perfect 3-0 against his former mates on the year and Sam Gagner joined in on the fun during yesterday’s victory, chipping in with a pair of goals and a four point evening. The same Sam Gagner who had recently been a healthy scratch under his new head coach and registered all of twelve points prior to his “offensive explosion” in the building he had previously called home since being selected sixth overall at the 2007 NHL Entry Draft.

With their head coach still in search of his first win in the “bigs” and in this club in the midst of yet another extended losing skid, expecting Edmonton to come out with one heck of a performance on the eve of their holiday break wasn’t unrealistic. Considering whom their opponent was and the fact Arizona was coming off a six goal thrashing at the hands of the Vancouver Canucks less than twenty-four hours earlier, it honestly did not seem that far fetched of an idea.

However for the umpteenth team this season, the Oilers found themselves behind the eight-ball due to the guy standing in front of their net. For some god forsaken reason, Todd Nelson and Craig MacTavish decided to turn to Ben Scrivens in goal for his fifth consecutive start, despite having just been lit up like a Christmas tree by the Dallas Stars during the final twenty-one minutes of Sunday’s 6-5 shootout loss to Tyler Seguin and company over at Rexall Place.

While both Scrivens and Viktor Fasth have struggled mightily to find their games in ’14-’15, it is the former Toronto Maple Leafs backup who has been given the lion’s share of work and inexplicably started all but three of the Oilers nineteen home dates. Outside of brief five game stint in late October, in which the Oilers won four straight and Fasth was on injured reserve, Scrivens has been far from solid when it comes to his performance.

Yet for reasons probably only Dallas Eakins and his former general manager could possibly know, this organization continues to force feed the former Cornell grad starting assignments he frankly has no business getting. While almost everyone expected to see Fasth get the nod against the Coyotes, apparently the two headed coaching monster felt he was far better suited to play the role of cheerleader and unfortunately for them, it was a decision that ultimately cost this club any real shot of heading into the break on a winning note.

In the span of exactly five minutes, Scrivens allowed two of the three shots he faced to sneak in behind him, including just a god awful goal at 1:44 mark to put his team in a deep hole before his head coach even had a chance of running through his four lines. It was an ugly start and despite cutting the lead in half courtesy of a fortunate bunch for defenceman Justin Schultz, the Oilers would get no closer and as usual…found their way on the wrong side of yet another winnable hockey game.

While starting Fasth would have “guaranteed” this team absolutely nothing, especially considering the Coyotes third goal more or less went through him and into the back of the net, as some point you have to make it a level playing field. Despite being the better of the two netminders during training camp, the former Anaheim Ducks goaltender was relegated to the role of #2 from the outset and nothing has changed.

Outside of Scrivens being in the first of a two year deal and Fasth in the final year of his, there is absolutely no reason for the former to be playing as much as he has. Those within the organization like to go on about giving guys level playing fields and accountability but in reality, they have done nothing of the sort. While I am all for giving your best players the opportunity to work themselves out of poor stretches, neither goaltender fall into that category and hence should not be given any sort of extra rope.

Unless some crazed individual inside the Edmonton Oilers organization truly believes Ben Scrivens is still the answer to this team’s ongoing goaltending wows, perhaps this coaching staff would be wise to stop playing favourites. Neither Scrivens nor Viktor Fasth have proven to be capable of carrying the load or responsibility of being a No. 1 goalie, so accept the situation for what it is and address it accordingly.

In all honesty, it should not be that difficult to figure out. Let them share the damn net and make sure neither one plays more than a couple of games in succession. It really is that simple and after all, when the decision was made to go with a pair of backups in goal…this was always going to be the eventual outcome.
Posted by Oil Drop at 9:19:00 am