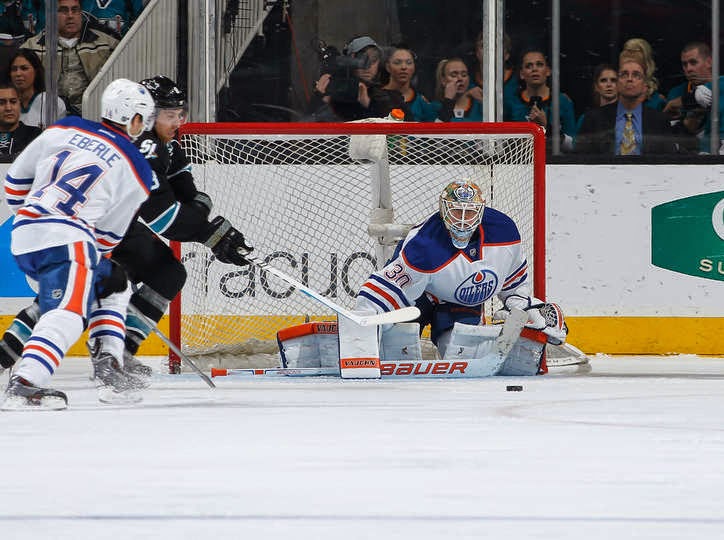 On an evening in which the Edmonton Oilers put together one of their finest all around performances of the season and managed to score three goals for the first time in the month of December, it was still not enough to keep this group from dropping their sixth consecutive game.


Despite getting more than a little bit of help from Antti Niemi on all three of those goals, it was the San Jose Sharks starter who played the role of hero with a last second robbery of David Perron that proved to be the difference in a hard fought 4-3 victory. While the Finnish netminder came up with the timely stop when his team needed it most, the same could not be said about the man down at the other end of the rink.

After standing on his head during a second period onslaught from the Arizona Coyotes on Tuesday night and giving his team a chance at earning two points they really had no business getting, Ben Scrivens was unable to hold up his end of the bargain against the Sharks. In the span of thirty-four seconds, Edmonton saw a one goal lead turn into a one goal deficit and Todd Nelson saw his record fall to 0-1-1 behind a National Hockey League bench.

There is no question the effort was there but it was still not good enough for to earn the win. With the loss Edmonton has now gone 1-12-5 in their last eighteen games and find themselves firmly planted in the basement of the Western Conference standings. However for a change, there was not much to not like about their game against the Sharks.

In all honesty, you would be hard-pressed to find a more entertaining game in which the Oilers have been involved in this season.  From start to finish, this team played hard and managed to hold their own against a pretty darn good hockey club and in a rink they traditionally struggle mightily in.

Boyd Gordon returned to action after missing the last five and made the most of being elevated up the depth chart. Instead of assuming his usual spot alongside Matt Hendricks on the fourth line, the veteran pivot found himself playing on a line with Perron and Jordan Eberle.  The trio were by far and away Nelson’s best unit on the night and Gordon opened the scoring late in the first, albeit on shot Niemi badly misplayed.

For the second consecutive outing, defenceman Justin Schultz looked like a completely different player and Tyler Pitlick continued to impress in a bottom six energy role…something this lineup has been missing for ages.  Add to that a trio of iffy goals on Mr. Niemi, two coming courtesy of some god awful rebound control from the Sharks veteran puck stopper, and this one was there for the taking.

Unfortunately Scrivens was unable to come up with a stop or two when his teammates needed it most…something which continues to occur on a far to regular basis for this lineup to have any real shot of turning this wasted year into anything other than exactly that.
Posted by Oil Drop at 7:29:00 pm