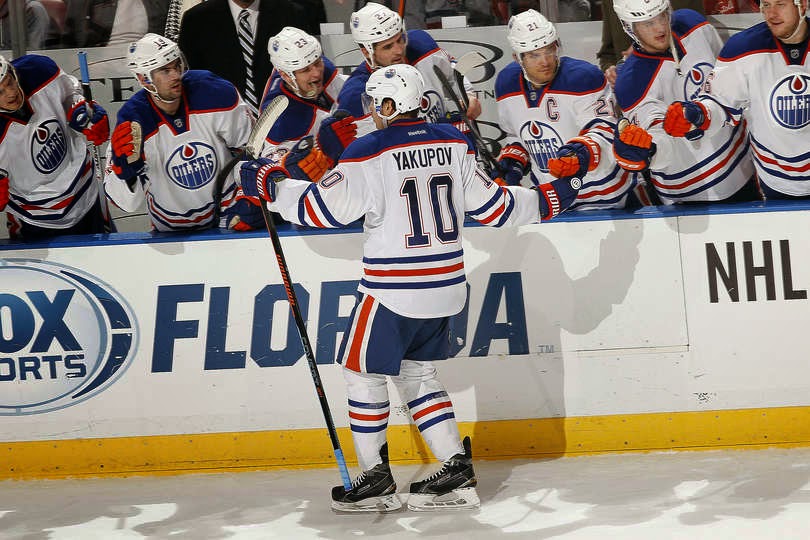 Ending losing streaks is something the 2014-15 edition of the Edmonton Oilers have become all too familiar with. While last night’s 3-2 shootout victory over the Florida Panthers was their first since November 9th, it also marked the fifth time this season in which this group had snapped an extended skid.

Despite having played just forty six games, this team has now had to endure winless runs of four, five, nine, eleven and fourteen games. While they managed to accomplish the latter over a ten week stretch in games played away from Rexall Place, dropping fourteen consecutive games is not something many teams have the “pleasure” of dealing with.

As good as yesterday’s win must have felt for a guy like Viktor Fasth, who has had his fair share of ups and downs but inexplicably seen far less playing time than partner Ben Scrivens, the one player who could benefit most from how things unfolded is the kid who currently wears the No. 10 on the back of his jersey.

While a suddenly red-hot Jordan Eberle managed to find the back of the net for the sixth time in his last nine games and Matt Hendricks chipped in with a crucial third period short-handed marker to allow the Oilers to get this one into overtime, it was the first overall pick of the 2012 NHL Entry Draft who stole the show.

For one to suggest Nail Yakupov has struggled to find his way as a National Hockey League player following what was a rather productive rookie campaign, would be putting it nicely. Through the past season and a half, you would be hard-pressed to find a more talented player who has looked more lost than the former Sarnia Sting standout. .

There is no question that much of the responsibility of how things have gone over the last sixteen or so months falls directly at the feet of the player but his former head coach allowed it to spiral out of control. While Dallas Eakins may have had the right idea in trying to help the Russian youngster develop his overall game, he clearly lost his way somewhere along the way.

Instead of allowing Yakupov the opportunity to grow as a player, while still being the dynamic talent the Oilers thought they were getting back in 2012, Eakins proceeded to focus on the negative. While we have seen the odd flash here and there, for the most part, the twenty-one year old had become nothing more than afterthought for his now former head coach.

So much so that last night was the first time in his brief NHL career that Yakupov was given the opportunity to take part in a shootout. While in the grand scheme of things it may not seem like that big of a deal but for a guy who is fueled by scoring goals and grabbing the moment, it is a pretty big deal.

How can you not be happy for the kid? To his credit, Todd Nelson decided to “play a hunch” and it paid off handsomely. Yakupov had his issues during the last night’s game and under his previous head coach it would have likely led to him being stapled to the bench in a tight game. Luckily his new coach was smart enough to recognize the situation for what was and to put his player in spot where he could not only succeed but possibly gain some much needed confidence.

Something tells me from this point forward, Yakupov will likely bend over backwards for his coach and it all it took was showing a little faith in the player. It is a feeling he surely has not had since Ralph Krueger was relieved of his duties and it probably took load off his mind. Now does one shootout game-winning goal mean all is good? Of course not but do not be surprised if we happen to see a different Nail Yakupov from now until the end of the season.

Kudos to Mr.Nelson, for recognizing the obvious and having the wherewithal to do what was best for the player and at least for the time being…drop the “tough love” routine that so many within this organization like to go on about. Sometimes all a kid needs is a pat on the back and chance.