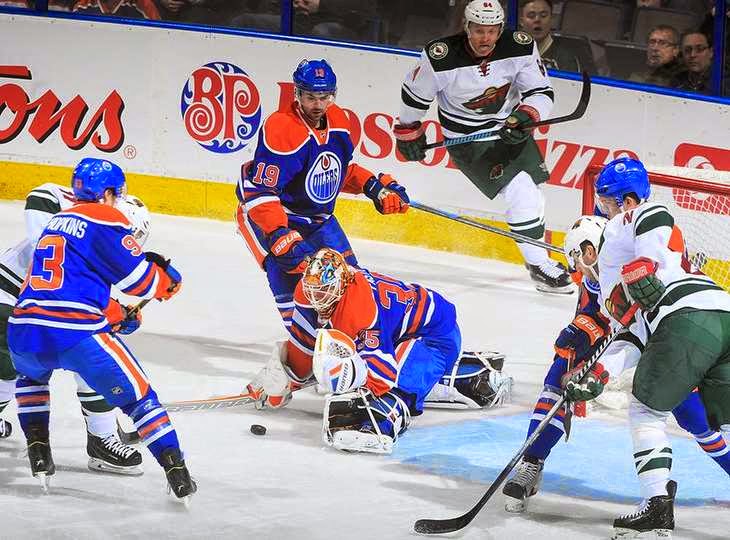 It’s not often that the Edmonton Oilers can say they have gone undefeated for what has essentially been a week and a half but that was exactly the scenario facing this team heading into their game on Tuesday night against the visiting Minnesota Wild.

Granted they had not played a game since their come from behind shootout win against the Washington Capitals back on January 20th but the fact of the matter remains, this group was on a two game win streak. Unfortunately for them, all that came to an end over at Rexall Place and for the fourth time this season, Edmonton found a way to lose a game to their former staring goaltender Devan Dubnyk.

On the strength of a highlight reel goal from Charlie Coyle, the Wild were able to eke out a 2-1 win in a game in which they absolutely had to have. While the Oilers more than held their own against Mike Yeo’s under achieving side, it was your prototypical loss from the team wearing Orange and Blue.

An inability to put the puck in the opposing team’s net combined with that one ill-timed blunder, did this group in for the umpteenth time. While Nail Yakupov’s egregious first period turnover put Todd Nelson’s crew behind the eight ball early on, that was essentially erased on Boyd Gordon’s late second period marker courtesy Kyle Brodziak’s skate.

It certainly was a lucky bounce but considering the circumstance in which Nino Niederreiter gave his team the lead, it was a break that the Oilers had coming to them.  While neither side really generated much in the way of high-quality scoring chances, both Dubnyk and Viktor Fasth did what was necessary of them to keep their respective teams in it and them a shot at winning.

Unfortunately for Edmonton, it was yet another neutral zone giveaway that ultimately turned this game around. With just under five minutes to play in a 1-1 game, one would think Jordan Eberle would be smart enough to not attempt to make a silly little drop pass in the middle of the rink…especially not with Anton Lander and Matt Fraser as his linemates.

Apparently keeping it simple and doing the obvious thing was something the Oilers leading goal-scorer was incapable of grasping and that decision essentially cost them any chance of leaving the rink with two points in their back pocket. The most troubling thing of all is the fact it is a mistake these players have made for ages and yet they continue to happen with far too great a regularity.

At some point…does it not need to stop?

To make matters worse, this team simply cannot score goals. With that being the case, the chances of this roster being able to make up for not one but two glaring mistakes, is almost non-existent. Add to that the fact Taylor Hall missed the game due to a “lower body” injury and “almost” becomes nothing more than a pipedream.
Posted by Oil Drop at 8:23:00 pm