Trading Partners: Oilers, Maple Leafs And A No.1 Goalie 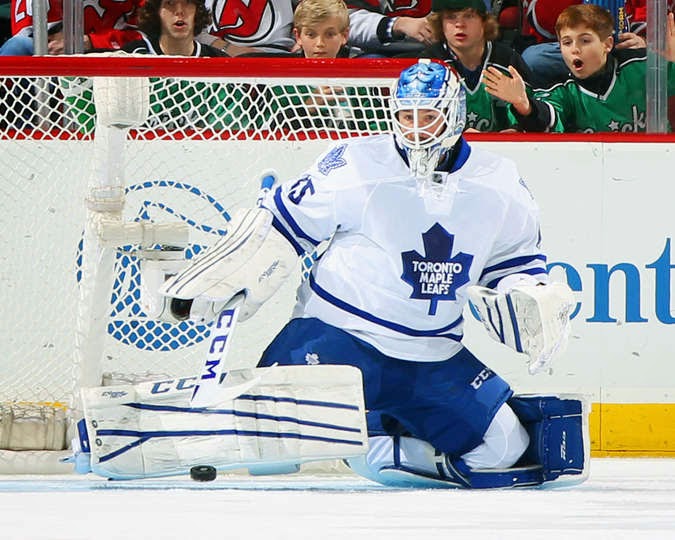 With the Edmonton Oilers in the midst of yet another disappointing season which will see them miss the playoffs for a ninth consecutive season and the Toronto Maple Leafs on the verge of making it nine of ten without a post-season appearance, these are certainly dark times for two of the most storied franchises in league history.
While the Oilers have already done their strip it to the bare bones and rebuild routine, it appears as though for the first time ever, the Maple Leafs are seriously considering going down that very same path. One can argue whether or not Edmonton’s overhaul will eventually get them to where they were hoping but one thing which cannot be denied, this is the best group of highly skilled young players this organization has had in very long time.
As hard as it may be for fans to accept, “blowing it up” is exactly what this franchise needed and the Maple Leafs currently find themselves in that very same scenario. Between now and this summer’s NHL Entry Draft, Toronto will be looking to move as many of their established players as possible with goal of being able to start their version of a “rebuild” in the immediate future.
While names like Phil Kessel and Dion Phaneuf are the ones most commonly thrown around as potential “trade bait” the reality of the situation suggests they will not be the only so-called “core” pieces Dave Nonis and Brendan Shanahan will be taking calls on over the coming weeks.
With the Leafs currently on an eleven-game losing streak and having won just twice in their last eighteen outings, there appear to be few pieces this organization would not seriously consider moving in a trade. Outside of defenceman Morgan Rielly and possibly winger James Van Riemsdyk, one would be hard-pressed to find another untouchable on their roster.
With that being the case, one can’t help but wonder if the Oilers might not be able to pull off a deal for a piece this organization has been in search of for some time now…a legitimate starting goaltender. When the Maple Leafs acquired Jonathan Bernier in the summer of 2013 in exchange for Matt Frattin and Ben Scrivens and what eventually turned into a second round pick at this year’s draft in Florida, Edmonton was one of other teams trying to swing a deal for the eleventh overall selection in the 2006 draft.
At the time, Toronto felt they had found their goalie of the future but fast forward to the present day and that may no longer be the case. Like the rest of his teammates, Bernier has struggled during the Leafs latest “run” and many are starting to wonder if he actually has what it takes to be a true No. 1 netminder.
While his play has been inconsistent at best during his second season in Blue and White, he is coming off a fairly solid campaign that saw him post a 26-19-7 mark with a .923 SV% and 2.68 GAA in fifty-five appearances in 2013-14. That said, with the team’s current predicament being what it is, all that anyone wants to talk about is this:


With Bernier set to become a restricted free agent at season’s end and the Toronto looking as though they are leaning towards tearing this thing down as opposed to “re-tooling”, perhaps the two are no longer a good a fit. At twenty-six years of age, the native of Laval, Quebec is about to enter the prime years of his career and keeping such a player will generally cost an organization a pretty penny and a rather lengthy contract.
With this team already headed in the wrong direction in the standings, something tells me Bernier will be in no rush to sign a long-term deal…especially not with unrestricted free agency all of one calendar year away. Also, let’s not forget Toronto already has James Reimer under contract for another season at a cap hit of just $2.3 million and while he has never proven to be a solid option as a starting goalie, winning games is something this franchise won’t be putting much emphasis on over the next couple of years.
Would it not seem to make perfect sense for the Oilers to inquire about the possibility of acquiring the very same goaltender they had set their sights on just a short time ago? While the cost will likely be more than what the Maple Leafs had to pay in order to pry him out of Los Angeles, where he had essentially become nothing more than Jonathan Quick’s understudy, it is not as though we would be talking about a “King’s Ransom” here.
Yes Bernier still has a bright future but has yet to grab the starter’s role by the throat since arriving in Toronto and with the aforementioned UFA situation being what it is, the Leafs would have to be somewhat realistic in their asking price. Though not an important part of the equation, one would think Nonis would need to have another netminder in return to finish out 2014-15 and Edmonton has two options on that front, with ironically enough, Scrivens being one of those options as well as pending unrestricted free agent Viktor Fasth.
Like Reimer, the Cornell graduate is signed for another season at the very same cap hit of $2.3 million and with both already being familiar with one another, they could form a decent tandem for a team not looking to accomplish much of anything in 2015-16. While money is never an object when it comes to the MLSE, the fact the pair would cost the Leafs a grand total of $4.6 million is not exactly a bad thing.
That aside, it is whatever other pieces Edmonton would be willing to cough up that would ultimately determine whether or not such a deal would have any hope of occurring. For Leafs fans who are hoping their GM might be able to pry loose the likes of Jordan Eberle, Taylor Hall or Ryan Nugent-Hopkins in any sort of deal, they can stop dreaming.
The same would hold true for Edmonton’s first round pick in this year’s draft, Leon Draisaitl, Oscar Klefbom, Darnell Nurse and probably Nail Yakupov. Though don’t be surprised to see Craig MacTavish relent when it comes to the talented Russian youngster….depending of course on the potential return. Outside of that, my guess is the Oilers would open to almost anything, including the Pittsburgh Penguins first round pick they acquired in the David Perron deal earlier this season or for that matter, any of their subsequent selections.
How about a kid like Martin Marincin, who many a general manager have already inquired about in recent years, or someone else already within the system? Say a Jujhar Khaira, Bogdan Yakimov or netminder Laurent Brossoit. Contrary to what some may believe, the Oilers actually do have some attractive pieces they have acquired via the draft and/or trade in the last few years.
The problem they have had is an inability to develop any of their previous picks into National Hockey League players, outside of the guys who looked to be sure-fire locks from the moment they were made eligible for the draft. The Edmonton Oilers have the necessary assets to make such a deal happen…now it’s just a matter of seeing if the Toronto Maple Leafs have any real interest on their end.