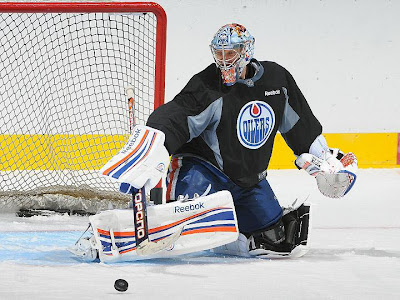 As on ice sessions began Saturday morning at Rexall Place, it was evident the Edmonton Oilers coaching staff want to push the envelope from the get go...while putting together four lines that will get no complaints from yours truly. The trios I was hoping to see upfront seems as though they will be given a shot to start camp, be it at the Joey Moss Cup or in the clubs first couple of exhibition games.
Comments from Eberle - Nugent-Hopkins - Smyth
They had the players split into three teams, which saw Team A hit the ice at 8:15am
TEAM A
Taylor Hall - Sam Gagner - Ales Hemsky
Hunter Tremblay - Anton Lander - Ryan Keller
Darcy Hordichuk - Gilbert Brule - Lennart Petrell
Curtis Hamilton - Ryan Martindale - Cameron Abney
Chase Schaber
Ryan Whitney - Jeff Petry
Andy Sutton - Corey Potter
Kirill Tulupov - Alex Plante
Tyler Schmidt
Nikolai Khabibulin
Olivier Roy
TEAM B

Ryan Smyth - Ryan Nugent-Hopkins - Jordan Eberle
Antti Tyrvainen - Chris VandeVelde - Teemu Hartikainen
Phillipe Cornet - Tyler Pitlick - Kristians Pelss
Tobias Reider - Colin Smith - Toni Rajala
Cam Barker - Tom Gilbert
Taylor Chorney - Colten Teubert
Johan Motin - Jeremie Blain
Martin Gernat - Wes Vannieuwenhuizen
Devan Dubnyk
Tyler Bunz
TEAM C
Magnus Paajarvi - Shawn Horcoff - Linus Omark
Ben Eager - Eric Belanger - Ryan Jones
Josh Green - Ryan O'Marra - Brett Ferguson
Drew Czerwonka - Tanner House - Mark Arcobello
Ladislav Smid - Theo Peckham
Martin Marincin - Brandon Davidson
David Musil - Taylor Fedun
Ryan Lowery
Yann Danis
David LeNeveu
The line of Darcy Hordichuk - Gilbert Brule - Lennart Petrell is an intriguing one, as Brule and Petrell are both out to prove they deserve a spot. Petrell is here with one intention and that is to make the big club. That being the case, look for Petrell to be physical throughout camp in hopes of making a lasting impression on the coaching staff. The 27 year old forward has a legit shot at the 13th/14th forward spot on the club and it would not be a big surprise for him to earn one of those spots.
As for Gilbert Brule, everyone including Gilbert, knows he must reestablish himself as an everyday NHL player. Be it because of illness, injury, poor play or some sort of combination, he has been unable to form any consistency in his game. If Brule wants to stay in the NHL, he needs to show it this season or his career could  very well be in jeopardy.
According to all reports, Nikolai Khabibulin had a strong first day of camp. This is no surprise to me, as I fully expect the Russian netminder to have a bounce back season. I know that I am in the minority but I feel he is out to prove a point. Having him come to camp focused and ready to go, on Day One, is a great sign for this team.