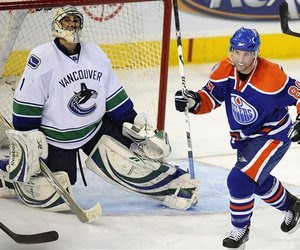 **Will be posted when made available**

Look for both Sam Gagner and Shawn Horcoff to make their pre-season debuts tonight against Vancouver. The Canucks will likely dress very few regulars tonight when they visit Rexall Place. Teams rarely dress their veteran players on the road in early exhibition games...I don't expect that will change tonight.

Injuries: With Andy Sutton now in camp, you would have to think the big defenceman will take the rest of the week to shake off the rust and play in one of the games this weekend against the Calgary Flames. Looks like the plan is to have Ryan Whitney see his first pre-season action this coming weekend against the Flames. The Oilers are obviously being very cautious with the blueliner and they will not push him until that ankle is ready to go. Ben Eager did  suffer a minor concussion after being nailed in the Joey Moss Cup by rookie defenceman Kirill Tulupov. No clear indication on his return but Coach Tom Renney told the media “It’s not severe”. Unless he suffers a setback, look for Eager to return on Tuesday, at the latest.

Oilers Trim Camp Roster By Four
The club cut four more players on Wednesday, sending goalie Tyler Bunz, David Musil, Jeremie Blain and Brandon Davidson to their junior teams. While Musil had a good camp it was the young Medicine Hats Tigers goaltender who made the strongest impression. Bunz was very good throughout camp and was outstanding in his lone start at the Young Stars Tournament. He clearly demonstrated that he may have a future in this league moving forward.Edmonton is now down to 54 players remaining in camp.
Posted by Oil Drop at 6:05:00 am