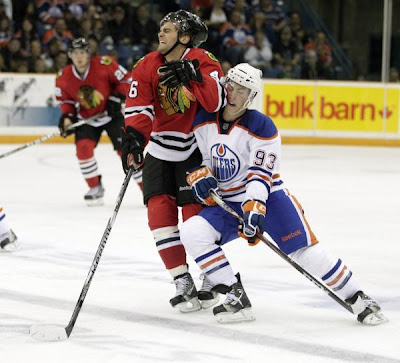 If one game is any indication of what's to come from the the trio of Ryan Smyth, Jordan Eberle and Ryan Nugent-Hopkins, it looks like they are headed in the right direction. The top line lead the way as the Edmonton Oilers split squad defeated the Chicago Blackhawks 4-2 in both teams first pre-season game.


Eberle, a Regina native, potted the winner late in third to give the Oilers the victory and send home the Saskatoon crowd happy. For his first NHL game, Nugent-Hopkins seemed poised all night out on the ice and looked in complete control when the Oilers were up a man.

The ice was  tilted towards the Oilers end in the first half of the opening stanza but Devan Dubynk stood tall in goal turning aside 10 shots early on as the Blackhawks were coming hard. As play settled down, the Oilers found their stride after that and played a strong game the rest of the way. Nugent-Hopkins scored the first goal of the game on the power play, sneaking a shot past Ray Emery in the second period, that was originally credited to Smyth. A short time later, Josh Greene put the Oilers up two on quick wrist shot but Chicago fought back to tie it up at two before the second period buzzer.

With just over five minutes to play, Nugent-Hopkins took a high sticking minor that the Oilers managed to kill off, thanks to a big save by Olivier Roy on a re-direct in tight. As the penalty expired, Nugent-Hopkins and Eberle pushed the play up the ice to earn on a two on one. After looking the first overall selection off, Eberle made no mistake and finished off the Hawks with his first of the pre-season. For good measure, Greene added his second of the night into an empty netter to make the final 4-2.

The chemistry that Smyth, Eberle and Nugent-Hopkins showed almost instantly, was nice to see. They fed off each other all night long and looked nothing like a line that was playing their first game as a unit. In my opinion, the three seemed to be an obvious line combination for the coming the season and they did not disappoint on night one.