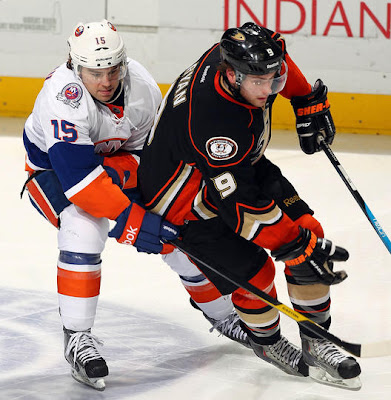 With the Anaheim Ducks in town Friday night to take on the Edmonton Oilers and rumours swirling around that Ducks GM Bob Murray is looking to shake things up, the obvious question becomes: Does a move involving the two struggling Western Conference sides make sense? While the two franchises have swapped players on numerous occasions in recent years,  they do seem as though they could, once again, become dance partners.

There are all sorts of stories out there that Anaheim is willing to move almost anyone if the right move came along but I can't see it. Unless another team was offering a straight up "superstar for superstar" swap or a  ridiculous over payment, why would Murray even entertain the thought of moving either Ryan Getzlaf or Corey Perry.? Which leaves Bobby Ryan as the most attractive asset and  likeliest candidate, to be shipped out of town by the twenty-ninth place Ducks. Don't get me wrong, any sort of deal involving Ryan would have to fill a number of needs for Anaheim or the move would make little too no sense.

While I am sure a move involving Bobby Ryan going to Edmonton would be an opportunity for Murray to inquire about one of  the Oilers three young studs upfront, he is fully aware of that discussion going nowhere. Having said that, when one looks deeper into Edmonton's asset pool it does appear that a potential deal between the two sides, may be possible.

Outside of the aforementioned tandem of Getzlaf and Perry, the Ducks are currently missing that high end secondary skill to help round out their top nine and like Edmonton, lack depth on their backend. They still have Teemu Selanne but with all signs pointing to this being the future Hall of Famers final season, the club badly needs to reload. With that being the case, one would have to think that a move that could potentially involve the likes of Magnus Paajarvi, Anton Lander, Sam Gagner, Jeff Petry, or prospects such as Martin Marincin, Tyler Pitlick, David Musil, to name a few, would be a deal that the Ducks would seriously have to consider. While Edmonton has many similar type players in their system, a guy like Gagner and/or Paajarvi could become lethal in place like Anaheim. Playing behind a centre like Ryan Getzlaf could be just what Gagner needs to help him take that next step in his development.

A simple one-for-one swap involving a player like Bobby Ryan would seem unlikely. For Anaheim to move a player like him for a single asset in return would accomplish what? Unless they are going to acquire a stud blueliner in exchange, that sort of deal makes no sense for the Ducks or any franchise looking to add the three-time thirty goal man. Ryan is a piece of the puzzle a team would be looking to add to take that next step or to put them over the top. Whereas Murray would have to be looking to shore up holes within the organization. With the cards Anaheim already have in their deck, a few more quality players could send them on their way to becoming a major player in the Western Conference in very short order. While they are not a player away from being back in the mix with the top teams out west, they will not be far off if they can manage to bring in quality pieces to help with the re-build.

From an Oilers perspective, Ryan is just the type of player this team is in desperate need of. They need a bigger bodied player to play in their top six, that isn't easily pushed around and has the ability to put the puck in the net. In my mind, the only assets Edmonton would not consider moving in this sort of deal would be Jordan Eberle, Taylor Hall, Ryan Nugent-Hopkins, Oscar Klefbom and their 2012 first round selection. Everything else would be in play, including their first round selection in 2013 and any other possible 2012 picks they may collect via trades leading up to this year's deadline.The two clubs look to be perfect trading partners...now all that remains is for Bob Murray and Steve Tambellini to come up with something that works for both franchises.
Posted by Oil Drop at 9:04:00 am