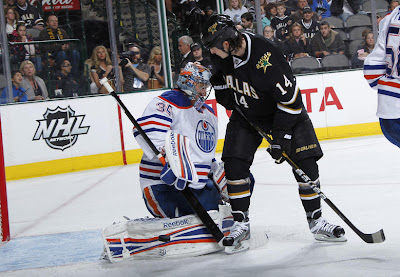 As the losses continue to pile up for the Edmonton Oilers, the body count of injured players keeps raising. Edmonton completed their season high seven game road trip on Saturday afternoon with a 4-1 loss to the Dallas Stars. The defeat left the Oilers with a 1-6 mark on the trip and have a record of 3-12 in their last fifteen contests. Having already lost rookie sensation Ryan Nugent-Hopkins to a freak shoulder injury  in Chicago, the last thing this team needed was another one of their key contributors to go down. Unfortunately for Edmonton, that's exactly what happened. when Jordan Eberle was forced to leave the contest with a right knee injury, early in the first period.

Right from the drop of the puck, both teams were pushing the pace and the visitors made it clear that they were not going to be pushed around like they were the last time these teams met in November. In what was a very entertaining period of hockey, the two sides exchanged changes with the best chance coming off the stick of Brendan Morrow but Nikolai Khabibulin was up to the task making a great pad save off the Stars captain. Moments later, the Oilers would watch their leading scorer leave the game after another bizarre injury.

In what was really a nothing play, Eberle and Dallas forward Jamie Benn had their skates lock with one another and the Oiler youngster got the worst of it. The teams leading goal scorer immediately tried getting to his feet but he was clearly in discomfort. After making his way to the bench and briefly talking things over with trainer  T.D. Forss, Eberle would head to the Edmonton dressing room and not return.

Even with the teams leading scorer in the dressing room, the Oilers managed to open the scoring courtesy of their healthy star forward, Taylor Hall. The sophomore winger and Sam Gagner broke into the Stars zone, with a head of steam and while Hall's initial effort was stopped by surprise starter Richard Bachman, the rebound caromed off the leg of defenceman Alex Goligoski high into the air and rainbowed over Bachman and dropped into the Stars net. It was definitely a lucky break but the scoreboard still read 1-0 for the visitors. For Hall it was his fourteenth goal of the season and fourth consecutive game that he has bulged the twine.

The second period saw much of the same, as both teams traded chances with Dallas continuing to get more quality chances then the Oilers. The lead would hold up until the 14:39 mark of the second period when Jamie Benn banged home his twelfth of the season, in the midst of a sea of Oiler jerseys. The power forward was somehow allowed to knock a shot past Khabibulin, from just outside the blue paint, while being surrounded by all five of Edmonton skaters. Corey Potter got himself out of position after attempting to break up a three-on-one break that started the whole sequence and that made what should have been a simple recovery, nothing more then a comedy of errors.

The Stars carried the play the final five minutes of the period but the teams remained tied at one and were also even on the shot clock with eighteen shots each. This would be the ninth time this season that the Oilers went into the third period even, with their record being a dreadful 0-6-2 in the previous eight games. On the opposite side of the spectrum, the Stars had already won nine games after heading into the final frame tied. Unfortunately for a severely undermanned Edmonton side, that record was about to get a little worse.

Dallas took it to the Oilers throughout the final twenty, out shooting Edmonton 16-8 and outscoring the visitors 3-0. Jamie Benn would notch his second of the afternoon, seven minutes into the final stanza, and the home side were on their way. After being stopped in tight by Khabibulin, Adam Burish ran over the Edmonton netminder, with a little help from Jeff Petry, and the loose puck came directly to Benn who deposited it into the yawning cage. The talented youngster seems to always score when he plays the Oilers and now sits with  nine goals in nine career games against Edmonton.

The Stars would extend their lead to 3-1 when pesky Mike Ribeiro would score a strange one from behind the Oiler goal, with just over six minutes to play. Ribeiro carried the puck into the Oiler zone and as he was coming around the net, he sent the puck towards the front of the net. On its way out, it first deflected off defenceman Colten Teubert then hit Josh Green before finally ricocheting in off Khabibulin's pad. Obviously a lucky break for the Stars but it was not much different then Taylor Hall's opening goal.

With this one in the books, all that remained was to see if Jamie Benn could complete the hat trick. He would get a great opportunity but a missed a chance at an empty netter. Ribeiro would  get a similar chance after picking Eric Belanger's pocket, with just over a minute to play. The centre made no mistake and deposited the turnover into the empty net, for his second on the afternoon.

With the World Junior Championships now over, Edmonton will head home for a short break before starting a long stretch of home games on Wednesday night against the New Jersey Devils. The Oilers have eight of their next twelve games scheduled on home ice, where the team has been solid going 10-6-2. Compare that to the ugly 6-16-1 mark this club has managed on the road and a trip back to the friendly surroundings of Rexall Place can't come soon enough.