The Resurgence of Sam Gagner 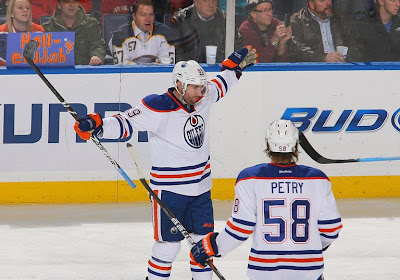 Sam Gagner is in the midst of his best stretch as an Edmonton Oiler in some time. In his last twenty-two games, the shifty centre has scored five goals while picking up thirteen assists and ultimately turning around what was looking to be a dreadful season for talented youngster. In his defence, the ankle injury he suffered during the pre-season set him back a fair bit and the coaching staff's unwillingness to play him with quality linemates made things even worse.

As if it wasn't going to be tough enough on Gagner to find his game after not playing in a regular season contest since March 9th of last season, having him start on the wing after returning from his ankle injury was an awful decision. To make matters worse, they put him on a line with Eric Belanger who was struggling then and has continued to struggle since. Once that experiment failed, they decided to try Sam nearly everywhere in the lineup. This season, he has played all three forward positions while playing with nearly every forward on the roster. Not surprisingly, he struggled badly during the first portion of the season.

In his first thirteen games of the season Sam had zero goals and two helpers...that is it. Obviously those numbers are not good enough but with him consistently being played out of position and with players that were in worse slumps then him or players with far less skill, the outcome wasn't terribly shocking. I wrote a piece back in November on Sam, that focused on this coaching staff giving him an opportunity to help him out of his struggles. Lucky for him, Taylor Hall went down with a shoulder injury in Colorado and he was finally given that opportunity to play with some of the best players on this team.

Not shockingly, Gagner immediately started putting up points when he was placed on a line with Ryan Nugent-Hopkins and Jordan Eberle. Make no mistake, Sam has warts in his game but for him to be an effective NHL player he either needs to play with skilled linemates or not play at all. Since getting that time on the top line with the two kids, the former first round selection has been fairly consistent.

With Eberle and RNH currently on the sidelines nursing injuries, the former London Knight star finds himself playing centre on the Oilers top line. Before being held off the score sheet on Wednesday night against New Jersey, Sam was on a five game point streak and has looked great since being placed on a line with Ales Hemsky and Taylor Hall. It is rather perplexing, that this line wasn't given a long look much earlier in the season. With the struggles of both Hemsky and Gagner being what they have been and the fact that many felt, myself included, that this trio would be Edmonton's first line to start the season...why did it take this long? Instead of force feeding minutes to Shawn Horcoff, Belanger and Anton Lander down the middle, they should have just put Sam in a top two centre role when he returned from injury and see how things panned out. That didn't happen and ultimately Gagner paid for it during the first quarter of the season.

Heading into the 2011-2012 campaign, many felt that this would likely be a make or break season for # 89 in this organization. He was going to be given top line minutes with better linemates and see what he could get done being the number one guy. His injury, the clubs fast start and the fantastic play of Ryan Nugent-Hopkins suddenly put his "big chance" on the back burner. Thankfully, it seems as though Gagner has once again become a priority this season. Moving forward, this organization needs to know where things stand with the fifth year Oiler and they were never going to get a true answer to that question while having him play in a bottom six role.
Posted by Oil Drop at 11:15:00 am