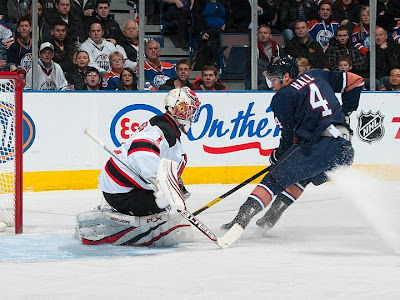 The Edmonton Oilers returned home from a lengthy road trip losers of six of their last seven contests. They were hoping the friendly confines of Rexall Place would help the struggling club find a much needed victory. Unfortunately, they couldn't get over that hump and dropped their their fourth consecutive game. Zach Parise scored 1:06 into overtime, in what was a very lack-luster affair, in leading the New Jersey Devils to a 2-1 victory.

In their first game back on home ice in nearly three weeks, the Oilers carried much of the play but nearly all their chances were generated by Taylor Hall. The talented winger was simply all over the ice in the opening twenty. He was generating chances for both himself  and his linemates but they were unable to sneak one past Johan Hedberg, who started in goal for the Devils. Outside of defenceman Andy Sutton giving away the puck or making poor decisions every time he hit the ice, Edmonton was sound defensively. Nikolai Khabibulin was called upon to stop all of four shots but his point blank blocker save off rookie Adam Henrique, was the best stop of the opening stanza, from either netminder.

Despite being shorthanded three times in the second period, it was New Jersey who took the play to the Oilers in the middle frame. After allowing Edmonton next to nothing during their first two power play opportunities, the Devils would open the scoring while killing off that second Edmonton man advantage. Jeff Petry mishandled the puck at the the visitors blueline and turned it over to,  of all people, Ilya Kovalchuk. The talented Russian corralled the loose puck and broke into the Oilers zone and with Petry hanging all over him, still manged to fire a perfect shot off the crossbar and past the helpless Edmonton netminder.The Oilers nearly tied it up late in the period but Hall was stoned in tight by Hedberg and the Devils took a one goal lead into the second intermission.

The Oilers came out with a lot more jump for the final twenty and were given two more shots on the power plays by the undisciplined Devils. After coming up empty on attempt number four, they finally broke through on their fifth try. Ales Hemsky would score his first power play goal of the season and first in fourteen games, when his quick slap shot sailed past a screened Hedberg, to even things up. With Ryan Smyth entrenched in front of the New Jersey goal, the talented Czech winger decided to finally shot the puck on net and just like that, the game was tied.

With the teams seemingly headed for overtime, defenceman Corey Potter was whistled down for an ill-advised tripping penalty with under a minute to play. Killing the final thirty-six seconds of the third wasn't going to be the issue but the pending four-on-three New Jersey advantage, looked to be troublesome.

The extra room left the highly skilled New Jersey forwards far too much time and space to play with and it was only a matter of time before the Devils would end this one. Parise would bang in his fifteenth of the season past Khabibulin for the victory.

The game marked the return of winger Magnus Paajarvi from a four week stint in Oklahoma City. The second year Swede seemed to have decent jump but for reasons none only to this coaching staff, was placed back onto a line with Eric Belanger. The two had struggled through much of the early part of the season as linemates, which made the move rather puzzling. The belief was Paarjarvi was being recalled to be given a shot in a top six role with both Ryan Nugent-Hopkins and Jordan Eberle out of the lineup...apparently that was not the case.

The loss drops Edmonton to 16-22-4 on the season and leaves them one point ahead of the twenty-eighth placed Carolina Hurricanes. Next game is Friday night against the charging Anaheim Ducks, who suddenly find themselves only four points behind the slumping Oilers.
Posted by Oil Drop at 12:49:00 am