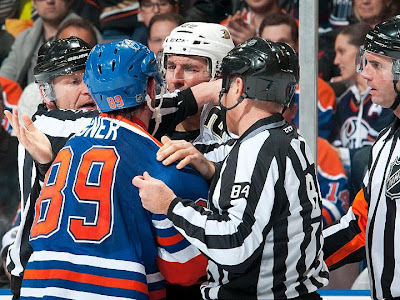 The Edmonton Oilers came back from lengthy and unsuccessful seven game road trip in hopes of finding their game on home ice. They are now two games into a three game home stand and nothing has changed. After being destroyed 5-0 on home ice by the twenty-ninth placed Anaheim Ducks, the Oilers are a team in complete disarray and there seems to be no end insight, to their current struggles.

Edmonton was given the chance to take control of things when Niklas Hagman fired the puck over the glass only seconds in but they were unable to take advantage of the early man advantage. After exchanging the occasional scoring chance, it was the Ducks who would open the scoring at the eight minute mark. With the Oilers in complete control of the play in their own zone, defenceman Colten Teubert sent a poor outlet pass that was intercepted by Saku Koivu along the boards. Two quick passes later the puck was on Jason Blake's blade, unmarked, and in front of Nikolai Khabibulin. The veteran snapped a quick shot that the Oiler goaltendeer got a piece of but still managed to find its way into the Edmonton cage. The goal was the former New York Islanders first on the season in what has been an injury plagued campaign, for the thirty-eight year old winger.

Anaheim stretched their lead to 2-0 early in the second. Teemu Selanne scored his fifteenth of the campaign with Sam Gagner in the penalty box. The veteran sniper caught a break when his pass from behind the Oilers net bounced off Khabibulin's skate and found it's way over the goal line. To that point the game was fairly even but Edmonton found themselves down by a pair.

As the play approached the midway point of the period, Gagner did his best to try and spark his teammates. Moments after Anaheim defenceman Francois Beauchemin had just missed nailing Taylor Hall with an open ice hit, Gagner decided to drop his mitts and take on the much tougher Ducks blueliner. In Beauchemin's defence, the veteran asked the Oiler centre if he really wanted to go and Gagner wanted in. Sam took a good five to ten head shots but refused to go down and found himself bloodied and bruised in the Edmonton penalty box. You would think that would have given a very flat Edmonton side some jump but instead it was the visitors who would increase their lead.

Ryan Getzlaf gained entry into the Edmonton zone and found an unmarked Bobby Ryan, who snapped a shot that deflected off Theo Peckham's stick and through  Khabibulin for his sixteenth of the season. That was three goals on fourteen shots and marked the end of the veteran netminder's night. Not exactly the way Nikolai was hoping to celebrate his thirty-ninth birthday.

Bringing Devan Dubnyk in obviously had little effect on the troops as the Ducks made it 4-0, just over two and half minutes after pulling Khabibulin. After turning the puck over in the Anaheim end, Edmonton somehow allowed  Corey Perry to get behind both their defencemen and he was promptly sprung on a breakaway by Getzlaf. While his initial shot was gloved by Dubnyk, the Oiler tender was unable to hold onto the puck and Perry quickly knocked in the rebound.

Not surprisingly, the Edmonton faithful had reached their boiling point and the boo birds came out in full force. Four goals on seventeen and a four goal deficit was all the fans could stomach on this night and things would only get worse in the final frame.

While Edmonton mustered up a few scoring chances in the third, they were emotionally disengaged and that simply can't happen. When you are getting killed on home ice and you just watched one of your best players destroyed in a fight, you would think there would be some sort of response but there was nothing.

The Ducks closed out the scoring when Perry deflected in a goal mouth pass from Selanne past Dubnyk for his second of the night and twentieth on the season. The Oilers wound up out shooting Anaheim 33-28 on the night but that is nothing more then a number because Edmonton was never in this one.
Posted by Oil Drop at 12:44:00 pm