Jarry continues to stumble as Oil Kings fall to Silvertips 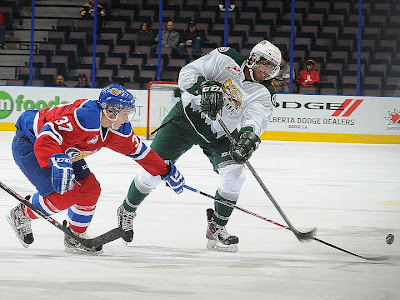 The Edmonton Oil Kings continued their early season struggles on Wednesday night, dropping yet another game on home ice, falling 4-2 to the visiting Everett Silvertips. Defenceman Matt Pufahl  and forward Joshua Winquist did all the scoring for the Silvertips, while Cody Corbett had both goals for the Oil Kings in a losing effort.

Edmonton Oilers prospect Jujhar Khaira was held off the scoresheet on the night but the big man was solid throughout, logging a ton of ice for head coach Kevin Constantine. While Khaira did not generate much offensively, the former third round pick played in all situations while showing off a bit of a mean streak with a nasty cross-check midway through the third period.

Oil Kings starter Tristan Jarry continued to look nothing like the goaltender who led the WHL with a microscopic 1.61 GAA and .936 SV% during the 2012-13 campaign. While it's still early, Jarry has posted a 3.36 GAA and a dreadful .886 SV% in eight appearances and have generally included more than a few iffy goals. Something which has not gone unnoticed by head coach Derek Laxdal.

"He's in a bit of a rut right now...and he's not where he wants to be at this time", said Laxdal."I was thinking on the bench do I pull him after the second one but he's our #1 guy and we gotta get him up and running. He settled in during the final two periods but he has a ways to go".

The Oil Kings bench boss went on to add this little nugget during his post-game scrum, which pretty much sums it up. "The Western Hockey League is a very good league and you have to have goaltending to win"  Which is exactly what the visitors got at the other end of the rink.

While Edmonton didn't generate many grade "A" chances, Austin Lotz was a rock in goal for Everett. Unlike his counterpart, Lotz was positionally sound from the drop of the puck and kicked out next to no rebounds. In fact, on one of the few occasions he did, Corbett ripped home the loose puck for second on the night...but it came with just eighteen second left on the clock.

Unfortunately for the Oil Kings, they were never able to recover from getting down early. Pufahl's harmless looking point shot somehow found its way through Jarry at the 1:24 mark and in a blink of an eye, Edmonton was playing catchup. They would get back on level terms courtesy of a power play marker off the stick of Corbett, who now sits with an eye-popping seven goal on the season.

However, before the period was out Everett would restore their lead courtesy of another questionable goal. Winquist would net his first of two on the night, on yet another shot that squeaked through Jarry and just trickled over the goal line. Overcoming a bad goal is usually tough enough to accomplish but when you need to erase two and do so against one of the premier defensive sides in the league, you are really facing an uphill climb.

Lotz was forced to make a nice stop off Curtis Lazar late in the period to secure the lead and stoned Henrik Samuelsson with a brilliant glove stop in the third to preserve the win for the red-hot Silvertips. Both Pufahl and Winquist managed to find open nets in the final minute of play, as they sandwiched Corbett's second of the night to make it a 4-2 final.

With the win Everett improves to 5-1-1 on the season and have now given up just 14 goals in seven games, which is tops in the WHL. Edmonton appears to be headed in the other direction as they fell to 3-5 on the year and have dropped three of their first five games on home ice. Having said that, the Oil Kings did receive some good news prior to last night's game, as the New York Islanders decided to return defenceman Griffin Reinhart back.to the Alberta capital for the 2013-14 season.

For a side that has been playing without any of their top four defenceman from a year ago, the arrival of Reinhart could be exactly what the doctor ordered. The former fourth overall pick will likely suit up for Edmonton's next game against the Spokane Chiefs and local product Mitch Holmberg, on Friday night at Rexall Place. The native of Sherwood Park, Alberta has been on fire to start the season for the Chiefs, as he currently leads all Western Hockey League skaters with 10 goals and 21 points. Ironically enough, he sits two points ahead of Griffin's brother Sam Reinhart, who has been ripping it up for the Kootenay Ice.
Posted by Oil Drop at 10:17:00 am