Another wasted trip out west 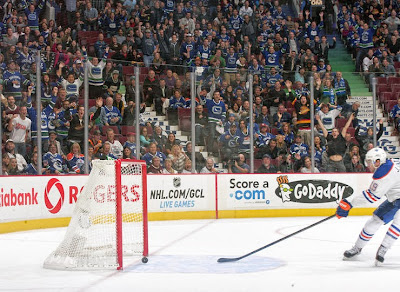 From the standpoint of a single game going as bad as one could imagine, last night's 6-2 pounding at the hands of the Vancouver Canucks was about as bad as it could get for the Edmonton Oilers. Starting with another poor performance from netminder Devan Dubnyk and finishing with what was arguably the worst game of Taylor Hall's NHL career, Edmonton were never really in this one.

Despite an early goal from defenceman Jeff Petry, one that Roberto Luongo would love to have back, the Oilers needed less than two minutes to hand the Canucks a gift and get them back on level terms. With Edmonton in the midst of an early opportunity on the man advantage,  Justin Schultz got caught on a bad pinch, allowing Brad Richardson the chance to tie things up on a shorthanded breakaway.

The former Los Angeles King made it look easy, beating Dubnyk along the ice with a nifty finish, after opening the big man up with slick little move in tight. Just like that, the early lead was erased and from that point on it was all Vancouver.

Over the next fifteen minutes, Dubnyk kept his team in it, as the Canucks pinned the Oilers deep in their own zone and proceeded to fire pucks on goal from almost everywhere. However, one those shots from "everywhere" would eventually find the mark, as a harmless looking point shot from Dan Hamhuis deflected off the stick of Petry and over the down and out netminder.

While the puck did change direction after hitting the stick of his defenceman, it simply fluttered towards the net in slow motion and Dubnyk seemed almost mesmerized by its looping trajectory into the back of the Oilers net. As to why the former second round pick felt it was necessary to drop to his knees on a shot from fifty feet out is still a mystery to me, the result was yet another ill-timed soft goal.

As if a goal with just over a minute and a half left in the period wasn't bad enough, an absolutely brutal giveaway from Hall would lead to another late period tally...all of eighteen seconds later. Jannik Hansen was the recipient of a lovely tic-tac-toe feed from the Sedin twins, ripping home his first of the campaign past a stunned Dubnyk.

In the blink of an eye, a tie game turned into a two goal deficit on the scoreboard and a 22-8 advantage on the shot clock for the Canucks. Heading into the intermission, Dallas Eakins had to find a way to light a fire under his players or this one had the potential of getting ugly. Unfortunately for the Oilers rookie bench boss, that fire was not lit and not surprisingly, things went from bad to worse.

Hall's tough night would continue early in period two, as he was assessed a boarding penalty for hammering Dale Weise into the sideboards and putting his team back on the penalty kill. Despite having gone 0-for-3 on the man advantage in period one, the twins simply toyed with the Oilers on opportunity number four, before Daniel Sedin fired his first of the season into a yawning cage, courtesy of a brilliant feed from Henrik Sedin.

Vancouver would extend their lead to four at the 13:56 mark and bring Dubnyk's night to an early end, as Ryan Kesler's wrist shot somehow found its way through the twenty-seven year old and into the back of the net. While the Oilers starter was partially screened on the play, he was once again out of position and far too deep in his net, as yet another long distance shot beat him on the short side. In his defence, the decision to pull him from the game seemed to be more of a mercy pull than anything, which Eakins confirmed during his post-game comments.

That said, two games into the season and the Oilers supposed #1 goalie has already been lit up for 10 goals in less than five periods of action and has looked less than impressive in doing so. LaBarbera kept a clean-sheet the rest of the way but was never really tested with any of the twelve pucks fired his way.

Boyd Gordon would finally get Edmonton back on the board before the period was out, converting a gorgeous feed from Ales Hemsky on an odd man rush, before zipping a laser past Luongo to make it a 5-2 game. Edmonton came out with a far better effort over the final twenty but had nothing more than a couple of crossbars to show for their trouble, thanks to a pair of brilliant rushes from Justin Schultz.

Jason Garrison would closeout the scoring, as his well placed clearance attempt found its way down the ice before settling nicely into an empty net for his second on the campaign. The win improved the Canucks to 1-1 on the season after dropping their opener against the San Jose Sharks, while the loss keeps the Oilers winless on the year, with an 0-2 record.

With centre Ryan Nugent-Hopkins expected to make his season debut on Monday night against the New Jersey Devils at Rexall Place, don't be surprised to see Taylor Hall return to left wing, in hopes of giving both the team and player a much needed spark. With RNH back in the mix and Edmonton coming off a rather lackluster performance in Vancouver,  look for Dallas Eakins to possibly reunite the trio of Jordan Eberle, Hall and Nugent-Hopkins, which has been the Oilers top line in each of the past two seasons.
Posted by Oil Drop at 10:07:00 am