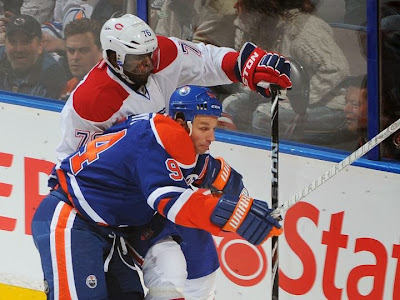 Over the last three seasons, the Edmonton Oilers have put together the worst home-ice record in the entire National Hockey League. This was supposed to be the year they were going to start putting up wins at home. If the first their first three outings on Rexall Place ice are any indication, they still have a long way to go.

A two point night from Alex Galchenyuk coupled with a three point effort from blueliner P.K. Subban, helped the Montreal Canadiens walk out of the Oilers home barn with a well earned 4-1 victory. Netminder Devan Dubnyk made his return to the crease, stopping twenty-three shots on the night and looked fundamentally sound for the first time this season. That said, Edmonton's starting goalie remains winless on the year with an 0-3 record.

Dallas Eakins' crew were handed a glorious opportunity to bury the Canadiens early on but did absolutely nothing with a pair power play chances inside the opening five minutes of play. Montreal would return the favour a short time later, when all they could muster was a couple of blasts by Subban from the point.

Outside of an entertaining tilt between Luke Gazdic and Brandon Prust, the first period featured a ton of end to end action but very little in the way of actual scoring chances and absolutely zero on the scoreboard. That would change early in period two, as the Oilers power play started to finally show signs of life.

Ryan Smyth would bang home his first of the season at the 2:28 mark, courtesy of a Taylor Hall bankshot/pass off the stick of the seventeen year vet. Smyth was in his usual spot, causing havoc in front of the Habs net, doing all of the dirty work and was ultimately rewarded for it. After being a healthy scratch against the New Jersey Devils on Monday night, #94 was hoping to contribute upon his return.

Montreal would get back on level terms midway through the frame, as Brendan Gallagher slid home his third of the year into a wide open cage, thanks to a great backdoor feed from Galchenyuk. Less than three minutes later, the Habs would grab their first lead of the night, as Prust crashed the crease, knocking a loose puck past a down and out Dubnyk.

They would add to that lead in the third, courtesy of Ryan Nugent-Hopkins losing a puck battle along the sideboards and an ill-timed bench from defenceman Andrew Ference. The Canadiens took full advantage of the opportunity, as Galchenyuk put away a simply gorgeous feed from Gallagher on a two-on-one break.

From that point on, Edmonton didn't generate much. While Habs netminder Peter Budaj was given first star on the night, stopping twenty-seven of the twenty-eight pucks fired his way, you would be hard-pressed to show me a difficult stop the journeyman tender was called upon to make.

With the loss, Edmonton sits with a 1-3 record on the year with a difficult six game road trip staring them in the face. Unfortunately, their inability to win games on home-ice has once again put them behind the eight-ball. It might be early but come mid-April, these points could loom rather large.
Posted by Oil Drop at 11:02:00 am