Oilers are deeper down the middle than most think 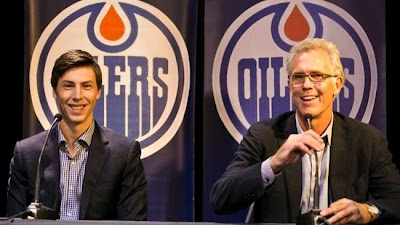 Heading into the Edmonton Oilers season opener there were those who were quite critical of Edmonton Oilers GM Craig MacTavish and his decision to not "upgrade" the centre position within the organization. Even before the freak injury to Sam Gagner during the preseason, many felt the eventual quartet of Ryan Nugent-Hopkins, Gagner, Boyd Gordon and Will Acton would simply not be good enough to compete over a full 82 game schedule.

Add to that the fact they would "only" have the likes of  a Mark Arcobello and Anton Lander waiting in the wings   down in OKC and suddenly depth down the middle became a main talking point. The thing everyone seemed to forget, was they knew all along RNH would be coming back far sooner than most anticipated. It had nothing to do with them "rushing" him back and everything to do with the kid healing quicker than they had expected. Period.

There is no question Gagner's broken jaw forced them into changing their plans to start the season, see Taylor Hall, but the endless pleads for Edmonton to go out and sign a Mikhail Grabovski or bring in bottom six guys who can't skate a lick, see Zenon Konopka and David Steckel, were frankly nothing more than an overreaction.

Too much has been made of a "minor-leaguer" like Acton not being able to fill a fourth line centre spot, when he is basically tailor made for such a role. A bigger body that can kills penalties, is decent in the face-off dot and would go through a wall to help his team win a game. That actually sounds like your prototypical fourth line centre.

As for a player like Grabovski goes, the organization made a commitment to Gagner as their #2C moving forward and a couple of short-term injuries wasn't going to change that. Cross Grabo off the wish list. While it has only been three games, Gordon has come as advertised and appears to be far more capable of producing chances in the offensive zone than any of us had believed possible. That said, his lack of production at the NHL level was kind of hard to simply overlook. Perhaps getting the opportunity to play alongside some high-end talent may help change that perception.

Bringing us to Arcobello. Is the diminutive centre a full-time NHL player? Probably not but this notion that the Oklahoma City Barons best player, for two years running, was not a sufficient stop gap was and remains absolute non-sense. How many other teams around the league have a player with Arcobello's skill-set and proven production level, albeit in the AHL, setting in the #5 hole within their organization?

While he hasn't done anything of note during the Oilers first three games of the season, he has been solid in all three zones of the ice, something which has not gone unnoticed by his head coach. Like Acton, he is nothing more than a depth player who is being asked to fill whatever role necessary for this team to win games and so far, both have looked more than capable of doing whatever Dallas Eakins needs them to do.

The addition of Gordon into the mix will give this coaching staff the ability to do exactly what they did on Monday night against the New Jersey Devils. Now playing Ryan Nugent-Hopkins 28+ minutes a night won't be a nightly occurrence, do not be surprised to see him push the mid-20 range on regular basis...even after Gagner returns from injury.

With the way this team is currently constructed, they need responsible two-way centres and Eakins has two of those guys in Gordon and RNH. The difference being, the Nuge has the ability to not only be a point a game player but also makes everyone he plays with that much better. In order for #89 to continue seeing major minutes at even strength, he will have to commit to being better in the Oilers half of the ice.

No matter where or whom Gagner plays with, putting up points should not be an issue. With the talent this team has upfront, scoring goals won't be a problem on many a night for the Edmonton OIlers. Having said that, if players are unwilling to do what is asked of them when it comes to the defensive side of the game, Eakins will not play them. That simple.

In a perfect world, using Ryan Nugent-Hopkins in the neighbourhood of 20-24 minutes night and Will Acton somewhere between 5-8 minutes, would leave head coach Dallas Eakins roughly half the game to split between Boyd Gordon and Sam Gagner. Leaving Mark Arcobello and Anton Lander waiting in the wings and giving the organization six capable bodies of playing down the middle at the NHL level.

Not sure about all of you but that is what you call having depth within your organization. Perhaps MacT wasn't off his rocker after all. While it is not a group without its flaws, especially from a size standpoint, if Nugent-Hopkins plays at the level he did in his debut and Gordon continues being Gordon, it would be pretty hard to not like the Oilers chances of holding their own when it comes to the battle down the middle of the ice.
Posted by Oil Drop at 10:45:00 am