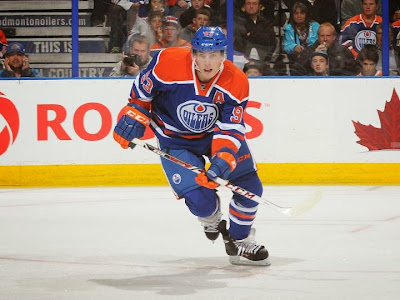 Now that is more like it. After both the Edmonton Oilers and New Jersey Devils skated their way through a less than invigorating opening forty minutes during last night's tilt at Rexall Place, the Oilers decided to take their game to another level over the final fifteen minutes of play.

Entering period three, Edmonton found themselves down 3-0 and staring at the very real possibility of starting the season with a third consecutive loss. A four goal third period outburst, in just under eight minutes, propelled the Oilers to a riveting come from behind 5-4 shootout victory in Monday night NHL action.

Ryan Nugent-Hopkins was simply outstanding in his season debut, logging over twenty-eight minutes in ice-time and igniting the Oilers comeback with a third period power play marker. The former first overall pick seemed to almost never leave the ice, leading all skaters with six shots on goal while going 50% in the face-off dot, in his long awaited return from off-season shoulder surgery.

After struggling in his first two appearances of the season, Devan Dubnyk was given the night off in favour of backup netminder Jason LaBarbera. The former Phoenix Coyote was making his first start in Oilers silks but much like Dubnyk, he was far from stellar in between the pipes.

First period goals from Jaromir Jagr and Damien Brunner put Edmonton behind the eight-ball after just eight minutes of action. While LaBarbera would likely want Jagr's opener back, it wasn't so much the type of goals he allowed but rather that two of the first five shots he faced found their way into the back of the net.

At some point you need a stop from your goaltender and through the opening three games of the season, Edmonton have yet to receive that type of performance from either netminder. That said, the performance the rest of the team delivered on Saturday night against the Canucks and through two periods against the Devils, was simply unacceptable.

Nugent-Hopkins got things rolling early in the third, thanks to an ill-timed delay of game penalty to defenceman Bryce Salvador, with his first of the year on the man advantage. Just under four minutes later, Andrew Ference would blast a shot off the post and past Martin Brodeur, for his first as an Oiler and suddenly the bench had life and Rexall Place was rocking.

The firsts would keep coming, as David Perron snapped home his first of the year right off the face-off, as Mark Arcobello's win in the dot led directly to the former St. Louis Blues game tying marker. In exactly 6:04, the Oilers had erased what appeared to be an insurmountable three goal deficit and got themselves back on level terms.

Taylor Hall would give them their first lead of the night at 13:30, neatly making his way around an attempted poke-check from Brodeur before sliding his first of the season past the future Hall of Famer. The goals came courtesy of a great feed from Ales Hemsky and a wonderful forecheck from centre Boyd Gordon.

With less than seven minutes to play and the Devils looking as though they had just been run over by a Mack Truck, this one looked to be all but over. However it would be New Jersey who would catch a late break to force this one to overtime, as Patrik Elias had his pass deflect off the skate of Ference and underneath LaBarbera to make it 4-4.

While Edmonton could not have been overly pleased with allowing the Devils a goal in the final minute of play, I am pretty sure Dallas Eakins would have gladly taken a 4--4 scoreline heading into the third. Neither side created much of anything during the extra session, forcing this one into a shootout.

Jordan Eberle would get things started, easily beating Brodeur with his now trademark backhand move to give the Oilers the early advantage. After Brunner missed the net with his attempt, Perron would make it two straight with a near carbon copy of Eberle's attempt.

LaBarbera would stop Ryan Clowe to seal the win and hand Edmonton as unlikely a two points as they will earn this season. In all honesty, after handing the Winnipeg Jets two points in the season opener, one might suggest this was nothing more than payback from the hockey gods.
Posted by Oil Drop at 8:02:00 am