Close but no cigar 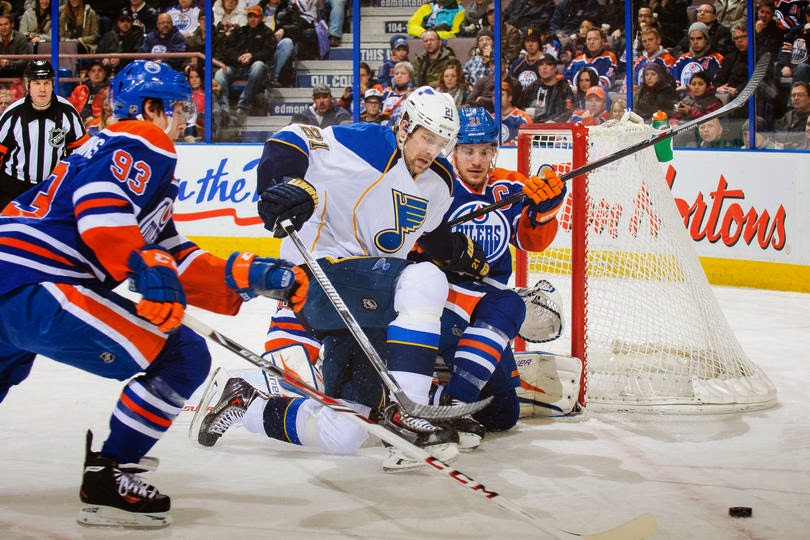 Even when the St. Louis Blues don’t bring their “A” game to rink, the Edmonton Oilers need everything to go just right in order to have any hope of beating Ken Hitchcock’s side. Last night’s 5-2 loss could have gone in a completely different direction but the Oilers best players simply weren’t good enough.

The top line of Jordan Eberle, Taylor Hall and Ryan Nugent-Hopkins were pretty much invisible from start to finish, as the Blues Olympic pairing of Jay Bouwmeester and Alex Pietrangelo were far too much for the Oilers young guns to handle. While at the end of the rink, rookie Brad Hunt had a night to forget and netminder Ilya Bryzgalov wasn’t nearly as good as this team needs him to be.

The veteran puckstopper did his best to keep the Orange and Blue alive during a first period in which St. Louis seemingly had the puck for the entire twenty minutes. Unfortunately he would allow a couple of ill-timed stinkers during period two, off-setting goals from Mark Arcobello and a suddenly red- hot Nail Yakupov. As if dealing with the Blues wasn’t tough enough already, spotting them a pair of goals makes them almost unbeatable.

For this team to even have a punchers chance against the upper echelon squads across the National Hockey League, they need their goalies to be very good. Of late, both Bryzgalov and Devan Dubnyk have been solid but both have been coughing up an iffy a goal or two every time out…which is something that just can’t happen. It just can’t.

To make matters worse, the on-ice officials decided to put their whistles away for the night, calling all of one minor penalty on the night. As bad as the Oilers power play has been this season, having a team like the Blues do whatever they would like and not be punished for it, is a recipe for disaster.

Not surprisingly, St. Louis would make the most of their first period power play opportunity, as Chris Stewart continued his dominance of the Western Conference cellar dwellers. Edmonton would shoot themselves in the foot by taking a couple of delay of game minors, courtesy of Jeff Petry and Ryan Jones, and David Backes would make them pay, beating Bryzgalov with an absolutely perfect shot for his seventeenth of the season.

That gave the visitors their third lead of the night and Vladimir Tarasenko would put this one to bed just three months later, on a shot the Oilers starting netminder simply had have. While Bryzgalov may have had his sight-line someone obstructed by defenceman Nick Schultz, as he hinted at during his post-game interview, there is no way a wrist shot off a faceoff should be beating an NHL goalie on the shortside…especially not in a one goal game.

With twenty-six minutes to go, this one was all but over. The Blues put it in shutdown mode and there was nothing Dallas Eakins’ side could do about it. Firing a grand total of three shots on goal in the third period, is a perfect way to ensure you have no chance of coming back from a two goal deficit. That said, should we have really expected anything different?
Posted by Oil Drop at 11:05:00 am