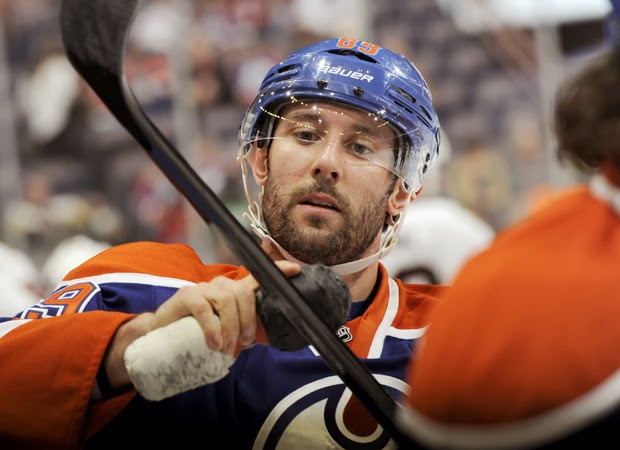 So it has finally come to this for Sam Gagner and the Edmonton Oilers. While it may or may not come to fruition during tonight’s matchup against the Pittsburgh Penguins, it looks as though #89 could be headed for a twirl or two on the right wing in the not too distant future.

After skating alongside Taylor Hall and Ryan Nugent-Hopkins during Thursday morning’s practice, one can’t help but wonder if Craig MacTavish has instructed Dallas Eakins to do his very best to showcase the former sixth overall pick.

With potential trade rumours swirling around the twenty-four year old over the past week, thanks in large part to Elliotte Friedman’s comments during last weekend’s Hockey Night in Canada broadcast, it’s an idea that might not be too farfetched.

In all honesty, should any of us really be surprised? If anything, should the surprise not be this road wasn’t seriously considered as an option prior to the here and now? The former London Knights standout has always had his limitations as a player but for whatever reason, they were largely ignored by most inside the organization.

The fact we are now seven years into Gagner’s career and the Oilers are still uncertain what he is as a player, is downright frightening. With all due respect to Sam, he has been the same guy for the last number of years. By now they should have either accepted him for who and what he is as a player and worked with that or simply move him along to another NHL city.

In a perfect world, the Oilers would have traded Gagner during what was a fairly productive 2013 campaign, at least from a point production standpoint. Instead they decided to fall in love with the player all over again and sign him to what was a rather hefty but somewhat reasonable three year ticket, considering he basically had the organization over a barrel.

That said, crying over spilt milk isn’t going to change anything. The situation us what it is but at least it looks as though MacT and company have finally come to the realization that Gagner isn’t the right fit as a second line centre on this team…which is a very good thing. However, the problem they now face is having a “second line centre” who no longer has the same trade value with a $4.8 million cap hit, as he did when he was in the midst of his most productive season and staring at the real possibility of becoming the youngest UFA in NHL history.

Funny how things can change in such a short period of time but change they certainly have. Now it will be up to the Oilers rookie general manager to ensure whatever move he makes involving Gagner, actually nets the club a quality return. In my mind, if MacTavish were to openly make him available, he would likely garner interest from most if not all of the other 29 teams in the league.

However the willingness to give up something of great value to acquire him is probably not there. Who knows, maybe he can pull a rabbit out of a hat and grab a Travis Zajac out of New Jersey, who is drastically overpaid at $5.75 million but a far better fit for a team like the Oilers.

Perhaps he gives Lou Lamoriello a call and inquires about both Zajac and the recently demoted Adam Larsson. That sort of swap could possibly work out well for everyone involved, though I am not sure good ol’ Lou would bite.

My fear is MacTavish will look to a team like the Toronto Maple Leafs as a potential trading partner and try and pull off a multi player deal that could land him David Clarkson. That same David Clarkson who has produced all of three goals and eight points during his first thirty-two games as a Leaf but was also heavily courted by this organization during this summer’s free agency period.

Unfortunately, the Edmonton Oilers are not dealing from a position of strength when it comes to Sam Gagner but that doesn't mean you just give him away. However, at the other end of the spectrum, it is quite clear this management group thinks rather highly of the young man as both a person and a player. Which is all well and good but they can not allow that to cloud their judgment when it comes to his true value.
Posted by Oil Drop at 12:02:00 pm