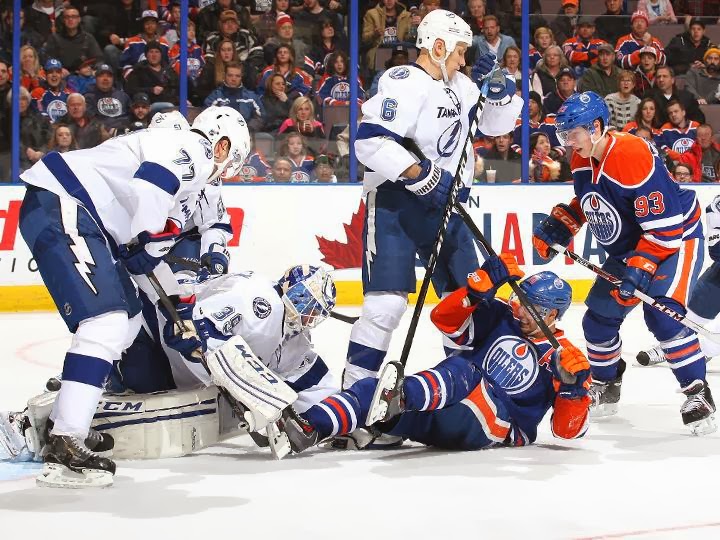 For one of the few times this season, the Edmonton Oilers caught a couple of breaks and used them to their advantage on Sunday night, slipping past the Tampa Bay Lightning 5-3 at Rexall Place. Jordan Eberle led the way upfront with a pair of goals while Taylor Hall rebounded from a couple of off nights, picking up his 40th and 41st points of the season.

Facing a Lightning side which was already minus their top player in superstar Steven Stamkos, the Oilers would also have the good fortune of not having to face netminder Ben Bishop beyond the 4:18 mark of the opening frame, as the Bolts first half MVP looked to injure his hand mere seconds before being beaten by Eberle on Edmonton’s first shot of the game.

While it was a tough break for Bishop, who is currently near or at the very top of every major goaltending category this season, his departure clearly had an immediate impact on his teammates. Despite jumping out to an early 1-0 lead, courtesy of Nikita Kucherov’s power play marker, Tampa became completed unglued after their #1 goalie left for the night.

Eberle wasted little time in potting his second of the period past backup Anders Lindback, scoring less than two minutes after the former Nashville Predator took over the crease for the visitors.  Before the period was out, Luke Gazdic would extend the lead even further, re-directing a Justin Schultz point shot behind Lindback for his first goal since the opening night of the season.

In what truly felt like a blink of an eye, Edmonton went from giving up yet another early goal against on home ice, to holding a 3-1 lead on the scoreboard and a 12-4 advantage on the shot clock heading into the intermission. What looked to be an uphill battle turned into a positive, thanks to the Bishop injury.

Give the Lightning credit. they righted the ship in the second and battled to get back on level terms, thanks to goals from defenceman Victor Hedman and former Detroit Red Wing Valtteri Filppula. They carried the play for much of the period and if not for some timely stops from starter Ilya Bryzgalov, the Oilers could have easily found themselves having to come from behind in the third.

Bryzgalov was solid in between the pipes, stopping twenty-four of the twenty-seven pucks fired his way, as he has now taken over the starter’s role from previous incumbent Devan Dubnyk. The veteran tender has started eight of Edmonton’s last eleven games since returning from a neck injury on December 15th in Anaheim, posting a 2-4-2 mark. As if there was ever really any doubt as to who was going to be the #1 guy after Craig MacTavish decided to bring Bryzgalov on board, all them should be erased…at least for the foreseeable future.

Dallas Eakins side would finally regain the lead eight minutes into period three, as Boyd Gordon scored his seventh of the season and second in as many games, on a shot that Lindback would love to have back. After being beat cleanly by both Ales Hemsky and Ryan Nugent-Hopkins early in the frame, only to be bailed out by the crossbar, the towering Swede looked completely out of sorts on what turned out to be the eventual game-winner.

From an Oilers standpoint, the two points could not have come at a better time, as the team was already in the midst of a four game slide, with their next three opponents being the St. Louis Blues, Pittsburgh Penguins and Chicago Blackhawks. Not exactly the easiest of roads to take but one could argue this group is long overdue for a win against one of the elite teams in the NHL.

However, if you are a betting man, it would be wise to approach the Edmonton Oilers with extreme caution over the next week. While this team may have enough firepower to upset one of the league’s best in a one-off scenario, the likelihood of them having their lunch fed to them in each and every one of those games seems far more plausible.
Posted by Oil Drop at 10:24:00 am