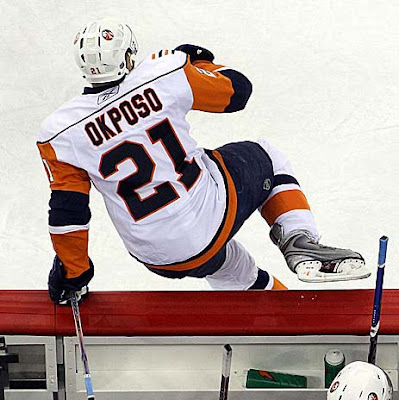 As the talk of moving Ales Hemsky continues to pick up steam, with both fans and media, it is looking like it will just be a matter of when and not if the Oilers decide to move the talented Czech forward. There are already rumours starting to circulate that the Detroit Red Wings have interest in the veteran Oiler winger and there is little doubt that many teams will inquire as to what the cost might be to acquire Ales Hemsky. The question becomes what would the Edmonton Oilers want in return? Would they be looking for a defenceman coming back in a deal for Ales? Or would they be looking at acquiring more prospects and/or draft picks? That being said, the New York Islanders would likely be one of the teams inquiring about Hemsky and they definitely have a player that should interest the Oilers, if that player were to be made available. That player being, Kyle Okposo.

Looking at where the two organizations currently sit, a possible Ales Hemsky for Kyle Okposo swap may make sense for both sides. The Islanders and Oilers are both in the middle of rebuilds and both clubs have needs that have to be addressed. Like Edmonton, New York has a very young and talented group of players but one thing they currently lack, is a legitimate NHL veteran that has the ability to put points up on the board. They need to look at bringing in someone who can help to lighten the scoring load on one John Tavares. Unlike the Oilers, the Islanders currently do not have the likes of a Taylor Hall, Jordan Eberle and Ryan Nugent-Hopkins all contributing on a regular basis on the score sheet. That being said, they have a nice group of young players upfront and moving a piece or two to bring in some veteran help seems like something they would have to consider.

Ales Hemsky has struggled with accepting a secondary role behind all of the Oilers talented forwards. He still wants to be that go-to-guy and that opportunity is no longer in the cards for him in Edmonton but that chance would definitely be given to him on Long Island. Adding a player as talented as Hemsky into the mix could be just what the doctor ordered for an Islanders team that desperately wants to make the playoffs.

In Kyle Okposo, the Oilers would be getting that bigger bodied young forward that this team seems to be missing. The former seventh overall selection has had his ups in downs in recent years but he has the type of game that could see him slotted any where in the top nine. Okposo has been inconsistent in New York but has shown the ability to put the puck in the net and a change of scenery should do him a world of good. Everyone has expected the right winger to take that next step towards becoming a legitimate NHL goal scorer but it has yet to happen.

Adding a player like Okposo into Edmonton's pool of prospects upfront, leaves the Oilers with the following players with a very good shot of playing in the teams top nine starting in the 2012-2013 season:
This would give Edmonton eight players that would all be under the age of twenty-five to start next season and have a decent chance of playing top nine minutes. Also, it gives the organization much more depth to seriously look at acquiring a top flight defencman in the off season. In order to trade for such a player, you need to have assets in place that would interest other teams but also ensure that moving such a player does not cripple your organization in other areas. As much as some would love to move Ales Hemsky for a young blueliner in his prime, that simply won't happen. If they want that defenceman, it will cost this team a combination of top prospects and draft picks...not a player like Ales Hemsky.
Posted by Oil Drop at 7:12:00 am