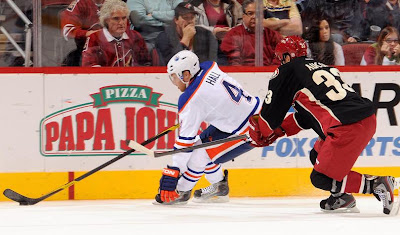 The Edmonton Oilers were excited with the prospects of having Taylor Hall and Corey Potter returning to their lineup for Thursday nights game. Unfortunately for the Oilers, goaltender Nikolai Khabibulin remained on the bench as a spectator. Backup Devan Dubnyk was solid early on but allowed a couple of back breaking goals in the third period, which resulted in yet another loss for the struggling Oilers. This time by a score of 4-2, to a tired Phoenix Coyotes team.

One would think the Oilers would have come out like gang busters after having four days and playing a Phoenix team that played last night. Outside of Hall and Dubnyk, they came out flat and the Coyotes took control of the game from the drop of the puck. Lauri Korpikoski opened the scoring with just under five minutes to play in the first but if not for the stellar play of the Oiler netminder, Edmonton could have easily been down 3-0 after one.

Though they continued to play poorly in the second, the Oilers managed to even things up when Hall scored his eighth of the season on the power play, just past the sixteen minute mark. After pinning the home side in their zone, Edmonton moved the puck beautifully from side to side until Hall was freed up for a goal mouth tap in. Just like that they were on even terms and the game was there for the taking. Instead the Coyotes took it to the Oilers during the final four minutes of the second and restored their lead. Radim Vrbata scored with thirty seven seconds left in the middle stanza and in a blink of an eye, it was 2-1 for Desert Dogs. Edmonton had been out shot 29-13, out hustled and out played thru forty minutes but still had the game in reach thanks to the play of their goaltender. Unfortunately for them, it was Dubnyk's turn to disappoint in the third.

Taylor Hall scored his second power play goal of the night, at the 6:11 mark to knot things up at two and you could feel the momentum starting to shift. The game was sitting there for the Oilers to take a stranglehold of, instead it would be the Coyotes who would respond.

After both Ryan Nugent-Hopkins and Jordan Eberle failed to clear the puck from the their zone, Edmonton native Shane Doan made them pay when he notched his eight of the season with just over eight minutes to go. Phoenix had done very little to the point in the period but managed to bury their opportunity to restore that one goal lead. There was still plenty of time for the Oilers to mount a comeback but that all changed when a harmless wrister from Oliver Ekman-Larsson eluded Dubnyk with just over five minutes to play.

The talented defenceman simply threw the puck towards the Edmonton goal, from the side boards, before getting crushed by Theo Peckham. To everyone's amazement, the puck somehow found a way to sneak past the Oiler goaltender. Devan was asleep at the switch and that goal ended all hope of any sort of comeback from the visitors.

Edmonton have now lost four of their past five games and things could get much worse before they get better.. The club is off to San Jose to take on the Sharks Saturday night and then return home for games against the Detroit Red Wings and the league leading Minnesota Wild, before taking a few days off for Christmas.