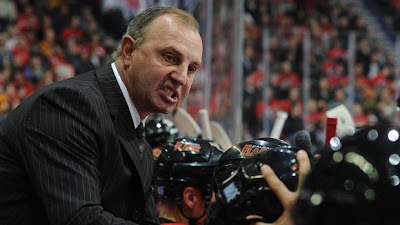 While Sutter had most recently coached the Oilers provincial rivals for the past three years, the Flames and their former head coach mutual decided to part ways after another season out of the playoffs for the veteran-laden roster. After failing to make the playoffs in any of his seasons as the main man in Calgary and the team's unwillingness to undertake a full out rebuild, it seemed only fitting that the two sides decided to part company.

Sutter has remained owner of the Red Deer Rebels throughout his brief NHL coaching career and could easily keep himself  busy running the WHL franchise, if he so desires. Having said that, if the two-time Stanley Cup winner were to decide to stay in the NHL and look for a fit that makes the most sense for him and his family, the logical choice would be to seriously look at the possibility of becoming the next head coach of the Edmonton Oilers.

The former New Jersey Devils head man, has made it pretty clear that any situation would  have to be the right fit for both himself and his family. Sutter has always been a family first guy and the opportunity to coach Edmonton would obviously allow him the luxury of staying close to home, while still coaching in the National Hockey League. Much like his hiring in Calgary back in 2009, the possible fit with the Oilers looks to be perfect for him on both a personal and professional level.

Another thing to consider, is the fact that Oilers president of hockey operations Kevin Lowe has already announced Brent as his head coach for the upcoming World Championships being held in Finland and Sweden during the month of May. Many feel that having Sutter run what looks to be a fairly young Canadian side, will allow Lowe a first hand look at how the coach handles not only an inexperienced group but also the relationship he builds with the likes of Jordan Eberle, Devan Dubnyk and former Red Deer Rebel Ryan Nugent-Hopkins. If Sutter shows the ability to not only guide the highly skilled Canadian side to success at this year's championships but also manages to build a rapport with some of Edmonton's core players, he would most certainly become the front runner to possibly replace Renney behind the Oilers bench.

Also, keep in mind that Sutter and Lowe have great respect for one another. The two played a very similar no nonsense style game throughout their careers and hold one another in very high esteem, after battling against one another in two hard fought Stanley Cup Finals in 1983 and 1984. Add to that the fact that both men absolutely hate to lose and that they would like nothing more, then to be part of the team that brought the winning tradition of the 1980's back to the province of Alberta.

In their minds, success isn't determined by playoff appearances but rather the amount of championships that a team wins. Not surprisingly,  that is the same mindset and expectation that is shared by the majority of Oiler fans. This clubs immediate goal is to get back into the playoffs, possibly as early as next season, but the long term goal for this talented group is to produce championships. With that being the case, the question now becomes, Is Brent Sutter the right man for the job? While no one can answer that question with any sort of certainty, when it comes to a Sutter brother, you would be best served to not bet against them.
Posted by Oil Drop at 10:09:00 pm