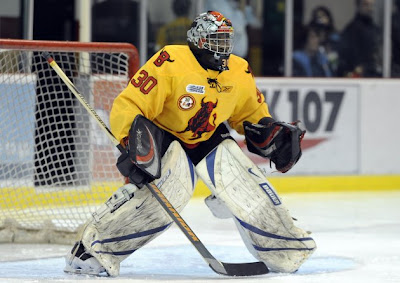 Malcolm is the younger brother of Montreal Canadiens blueliner PK Subban but the netminder has made a name for himself with his strong play with the Bulls over the last two years. In recent weeks, he has started to garner attention  from the likes of Craig Button, who has the pushed him up to number ten on his latest edition of the "Craig's List". He is widely regarded as the top North American goaltender available and seems to be ranked around just outside the top twenty in most other pre-draft lists.

After suffering a couple of  injuries early in the season, the second year Belleville tender put together a rather impressive sophomore season in the OHL. He was top five in both goals against average and save percentage, while going 25-14 in thirty-nine appearances. While not an overly big netminder at 6'1", Subban is an athletic goalie that possess cat-like reflexes and an absurdly quick glove hand.

Even though Button has him ranked in his top ten, it seems unlikely that Malcolm would be selected inside the top fifteen. With that being the case, Edmonton would do themselves well to find another pick inside the top thirty and select the youngster before he comes off the board. As everyone knows, this team could use a few more players on the backend but that does not mean they need to go that route in the first round of this year's draft.

With the development of Ladislav Smid and Jeff Petry with the big club and the likes of Oscar Klefbom, Martin Marincin and David Musil already in the system, they have some very nice pieces.Add to that, the fact Edmonton will likely go hard after Anaheim Ducks prospect Justin Schultz, if he doesn't sign with the Ducks before the first of June and taking a shot at Subban seems like an even better idea.

No one would argue that this team is graced with thee of the best young forwards in the game with Jordan Eberle, Taylor Hall and Ryan Nugent-Hopkins and could possibly make it four, if they decide to draft Nail Yakupov with their number one pick. With that being the case, it would only make sense for the organization to do their best to bring a young elite level goaltender into the system...just as they did some thirty-one years ago.
Posted by Oil Drop at 9:48:00 pm