Decision day is coming for the Oilers and Gagner 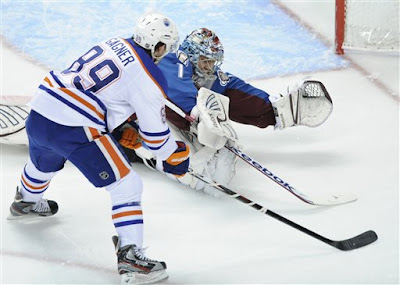 This coming Friday, Sam Gagner and the Edmonton Oilers are scheduled for what will be a crucial arbitration hearing for the future of the Oilers young centre. While the process is often something neither side typically enjoys being a part of, you can bet the Oilers will be doing their very best to rip his game to pieces, in hopes of getting the soon to be twenty-three year old under a manageable number. Though at the end of the day, it could be a number that they will ultimately not have to deal.

In his first five seasons in the National Hockey League, Sam has been consistent...almost to consistent. He put up 49 points during his rookie campaign and followed that up with seasons of 41, 41, 42 and 47. After getting the shaft for the first two to three months of the 2011-2012 season, Gagner bounced back to end up with his highest point total since his rookie year. That being said, it comes with a bit of an asterisk.

The former London Knight standout obviously had a three period run for the ages, when he scored 11 points over two games against the Chicago Blackhawks and Detroit Red Wings. Yet he followed that up with a stretch that saw him collect only seven points over the Oilers last twenty-three games, despite playing major minutes. Has he pretty much reached his scoring potential? Are we talking about a 60 point season being his absolute high end?

When the Oilers selected him sixth overall in 2007, they were probably hoping that he would develop into a first line centre but 366 games into his career, that seems unlikely. Having said that, it is clear that Gagner will be a solid second line option for years to come and brings us to the obvious question. What is a "solid" second line centre worth and more importantly, what will one be worth in the City of Champions?

With Sam having already played five seasons at the age of twenty-two, there are not many comparable players when it comes to age and experience. His last contract saw him earn $2.275 million, putting him in the same range as other young centres like Patrik Berglund of the St.Louis Blues and Bryan Little of the Winnipeg Jets. Both are twenty-four years old and outside of Berglund's tough 2010 campaign, have scored at pretty much the same clip as Gagner.

Heading into Friday's hearing, you can bet the one player that the Edmonton centre will be using as a direct comparable will be James Van Riemsdyk. While the Toronto Maple Leafs forward gave up UFA years in the pact he signed in Philadelphia, he has not been as good or consistent as Gagner. They were both in the same draft class, with Van Riemsdyk going third overall but Sam has outscored him on a points per game average .60 to .51 and has played nearly twice as many games. All the hype might be behind the young American but Sam has been the better of the two since being selected in 2007.

From Edmonton's standpoint, I'm guessing they will do their best in trying to use Claude Giroux as their comparable. The Flyers centre has a cap hit of $3.75 million and is coming off 93 and 76 point seasons. While he is a year and a half older than Sam, they were both forty point players during the 2009-2010 campaign but Giroux has elevated his game to a whole different level and Gagner has remained stagnant. It is a pretty easy argument to make. If the future captain of the Flyers is making $3.75 million and is one of the best young players in the game, how could Gagner make anything north of $3 million?

Having said that, the easiest and most logical comparable is Columbus Blue Jackets centre Derick Brassard, who makes $3.2 million and is basically the mirror image of Gagner. The Jackets youngster was drafted the the year before the Oilers centre and was also taken with the sixth overall selection. Sam has scored 89 points over the past two seasons in Edmonton. Brassard has collected 88 over the same time frame in Columbus. Both are players that their respective organizations and fan bases have expected more from but are very leery of giving up on.

At the end of the day, it likely won't matter. As I fully expect Sam Gagner to be moved at some point this off season or next. Some have referred to me as a "Gagner-hater" in recent weeks, which I find comical. Especially when you consider I was the guy who stood up for Sam, after he was given the short end of the stick on various occasions over the last couple of seasons. The guy is a very good player but has become redundant on this roster. Great complimentary player...just not in Edmonton.
Posted by Oil Drop at 10:09:00 am