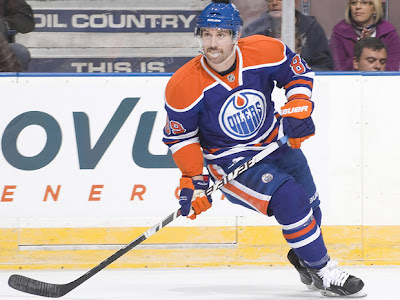 It was no shock that the Edmonton Oilers and Sam Gagner came to a last minute agreement on a one year, $3.2 million deal on Friday morning. The signing kept both sides away from the dreaded arbitration process but it also confirms this organizations lack of confidence in the soon to be twenty-three year old centre, moving forward.

With the likes of T.J. Oshie signing a long term deal within the last 24 hrs and talk surrounding the Winnipeg Jets trying to ink Evander Kane to a six year pact, the Oilers decided one year was more than enough for the former London Knights stand out.

Nearly every other organization have made a point of signing their own players to long term deals. It was a trend that kicked into gear during the 2011-2012 NHL campaign and left this year's free agent crop as one of the worst in recent memory.

Yet in Edmonton, that hasn't been the case. They signed veteran winger  Ales Hemsky just before last year's Trade Deadline to a two year contract extension and now inked Gagner to a one year deal. No three or four year deals here...which says a lot about what Steve Tambellini and company think of their current crop of "veteran" players.

While Hemsky's situation was somewhat different, being a pending UFA and coming off a couple of injury riddled campaigns, Gagner's signing speaks volumes. In my Monday morning column, I said the most logical comparable was Columbus Blue Jackets centre Derick Brassard, who makes $3.2 million, and that is exactly what Sam received.

I'm sure he was holding out hope for something in the neighbourhood of $4 million but that was nothing more than wishful thinking. That being said, who could blame him?

After watching Oshie sign for five years with the St. Louis Blues, Gagner was probably hoping he and the Oilers could come to the same sort of agreement but I'm guessing that was never on the table. Oshie has scored at basically the same clip as Gagner but their is one big difference.

The young American winger is a handful to play against and brings a physical element, something Sam doesn't do. They may both be 45-55 point players but one guy brings something to the table on a nightly basis, while the other tends to disappear for long stretches. If you are a one dimensional player, that dimension needs to be pretty special and in Gagner's case, it is not.

Make no mistake, Edmonton still like the player but they are not confident that he is "the guy" moving forward...at least not at a price tag of $4 million. In their defence, they do need to keep an eye on the future and not make a decision they will regret later..

With both Jordan Eberle and Taylor Hall up for hefty pay increases after next season and Ryan Nugent Hopkins and Justin Schultz headed for the same thing a year later, the Oilers need to spend their money wisely when it comes to their complimentary players and they obviously feel that Gagner is no sure thing.

From Edmonton's stand point, this was the only deal that made sense. Gagner still needs to prove what he is and signing him to a lengthy deal would have been an awful decision by Tambellini. I have said for months that Sam is a nice player but no longer a good fit in Edmonton. The fact the organization refused to sign him to any sort of multi-year package, tells me they likely feel the same way about the former sixth overall selection.
Posted by Oil Drop at 9:37:00 am