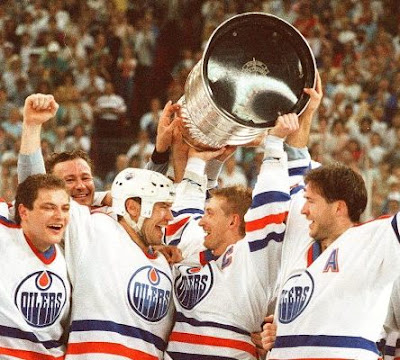 With the Edmonton Oilers heading into Game Four of their 1988 Smythe Division Final against the Calgary Flames with a commanding 3-0 lead, it was no longer a question of whether or not they could avenge their heart-breaking Game Seven loss from 1986. The question was could Wayne Gretzky and company pull off the four game sweep of the President Trophy winners?

Northlands Coliseum was filled to capacity and ready to erupt and the defending Stanley Cup Champions made it clear from the outset, that they fully intended on ending this series in four. Right from the opening face-off, it was wave after wave of Edmonton pressure and while they did not manage to find that early goal, they were awarded three power play opportunities in the opening ten minutes of play. It was only a matter of time and that time came during that third man advantage.

It wasn't your typical Oilers power play marker, as Esa Tikkanen stole the puck from a wandering Mike Vernon and found Mark Messier in front, who banged  home his third power play goal of the series. They had yet to hit the midway point of the period and the party was on. The "Sweep" signs were everywhere and that opening goal sent Northlands into hysterics.

They would make it a two goal cushion late in the first, when Craig Simpson ripped home his first of the series, off a perfect feed from Jari Kurri. The Oilers were at their free flowing best and Calgary were struggling badly and could hardly keep up...it would only get worse from there.

The lead would be stretched to three early in the second, as Wayne Gretzky would score his fourth of the series on what was a bit of a lucky goal. With Edmonton breaking out on a two-on-one break, Gretzky's intention was to feather a pass over to Geoff Courtnall to bang his first of the playoffs into a yawning Calgary net but his pass hit the skate of defenceman Brad McCrimmon and ricocheted right back to Gretzky. Leaving the Great One a half empty net, as Vernon had started to make his way across the crease to deal with Courtnall. A fortunate bounce but one the Oilers had more than earned.

Tikkanen would make it 4-0, as his harmless looking slap shot found its way through a partially screened Vernon and in turn, bringing the netminder's evening and series to an end. He lasted less than twenty-seven minutes in the series clincher and after being such a big part of Calgary's upset win over Edmonton in '86, the Oilers had little trouble finding ways to beat Vernon this time around.

Calgary would get goals from two of the unlikeliest of sources, as Craig Coxe and Dana Murzyn scored a couple of minutes part to give the Flames some hope of pulling off the come back but that didn't last long. Before the period was out, seldom used veteran Dave Hannan would beat both Calgary defenceman to a loose puck on the side boards and slipped a backhand past goaltender Rick Wamsley. It was one that the former Montreal Canadian netminder would love to have back but just like that, the bulge was back to three.

To the Flames credit, they didn't throw in the towel. Joe Nieuwendyk would punch home his second of the series, only moments after Hannan had made it 5-2, as the Oilers seemed to still be in post goal party mode. That made it three goals in the span of five minutes and with just over a period of hockey left to play, they still had hope.

The two sides went end to end over the final twenty and it was the Flames who had the better chances but as he did throughout his Hall of Fame career, Grant Fuhr came up with the huge save when his team needed it most. He made a brilliant diving pad save off Hakan Loob on a two-on-one break, that earned the Spruce  Grove native a standing ovation from Oilers faithful and followed that up, with another pair of dazzling pad stops off Loob, only moments later. Calgary had their chances but were unable to get one past #31 at crunch time. It was a pattern that started back in Game One and lasted throughout the series.

After their goaltender's heroics to keep the Flames at bay, Edmonton would respond on cue, with goal number six. Not shockingly, it came off the stick of Glenn Anderson. The speedy winger always had the knack for scoring big goals, be them of the game tying, winning or clinching variety and this one was definitely the clincher. That made the score 6-3 and despite a late goal from John Tonelli, Edmonton would hang on to complete the four game sweep and hand their provincial rivals the payback they so desperately wanted to deliver.

In the end, it was not as though Edmonton pounded the Flames but the Oilers best players produced and Calgary's did not. In goal it wasn't even close, as Fuhr did what he does and Vernon let in the odd questionable goal and usually at the worst possible time. As far as scoring goes,  Joe Mullen and Nieuwendyk were the only forwards who managed to register three points while the Oilers were led by Kurri and his nine point barrage in four games, followed closely by Messier with seven and Gretzky with six... and all of their points came at critical points of the series. 'Nuff said.

Edmonton would go on to win their fourth Stanley Cup in five years, losing only two games the entire playoffs. While the 1988 Oilers were nowhere near the most talented group Glen Sather had manged to put together over the years, it could easily be argued that is was the greatest "team" he had ever assembled. Unfortunately, it was a group that would only get one kick at the can, as Gretzky would find his way to Los Angeles during the off season...leaving both fans and players thinking what might have been.