Omark off to Switzerland 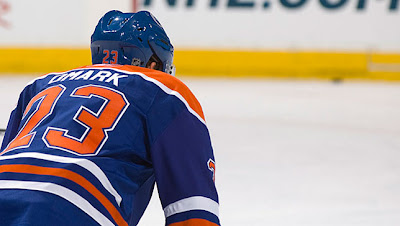 It was just a matter of time and apparently Linus Omark felt now was that time. With no real shot of earning a regular spot with the Edmonton Oilers and the pending NHL lockout, the twenty-five year old winger decided to try and keep his dream of becoming an NHL regular alive, by signing on to play the 2012 - 2013 season with the EV Zug, of the National League A in Switzerland.

The Swedish winger broke the news of his decision early Wednesday morning, posting the message "Finally i got a new team, looking forward to play for Zug!", on his Twitter account. While the diminutive winger has high-end skill, he found himself behind better players within the Oilers organization and frankly had little to no chance of sticking with Edmonton for the upcoming season...whenever that might be.

During his time in the Alberta capital, Linus managed to put up 8 goals, 30 points and a less than stellar -21 rating over two seasons. While he did appear in only sixty-five games during that time period, he still excited many a fan in Oil Country with what seemed to be an endless bag of tricks, when it came to the shootout, Unfortunately, the issue with the talented winger wasn't what he did or didn't deliver during the "skills competition" but rather his lack of production at even strength.

In his defence, Omark was never really put into a situation that best suited his abilities but some would argue that a player must earn that shot and not have it simply handed to him. The former fourth round selection did show flashes of brilliance, usually with Edmonton on the man advantage, but they were few and far between. To be honest, the moment Edmonton decided to draft Ryan Nugent-Hopkins with the first overall selection in the 2011 Entry Draft, it all but ended Omark's chance of being in the Oilers long term plans.

To this point, there is nothing in his game that points to Linus being anything more than a power play specialist and that opportunity went out the door when RNH came into the picture. Could he still be a decent fit as a second/third line guy in a different organization? Possibly but in Edmonton it wasn't going to happen. For a club who's top six forwards are already on the smallish side, adding an even smaller player into the mix, makes little to no sense.

Moving forward, the Edmonton Oilers will still retain Omark's NHL rights. Having said that, if the native of Overtornea, Sweden can put together an impressive season in Switzerland and work on certain areas of his overall game, there will undoubtedly be teams that coming calling. At the moment, it is pretty darn clear that his value is nil. General Manager Steve Tambellini openly admitted trying to move Omark at the draft but there were no takers. Something that Linus Omark would be wise to take to heart and do whatever is necessary, to get himself back into the NHL.
Posted by Oil Drop at 10:47:00 am