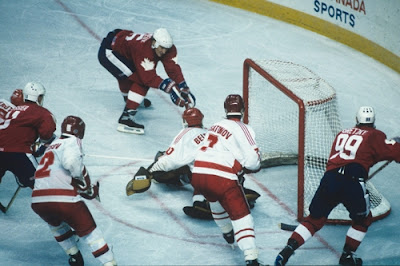 There was no margin for error and Canada was all business heading into Game Two at Copps Coliseum in Hamilton. While it seemed unlikely that the two sides could match the drama of two night's earlier, they actually took it one step further...playing what many consider to be the greatest game ever played. Right from the drop of the puck, the action was fast and furious and the Soviets needed only seconds to create the game's first great scoring chance.

The KLM line wasted little time in trying to put Canada away early, as Sergei Makarov's perfect deflection was turned aside by Grant Fuhr with a textbook sliding pad stack, just past the thirty second mark. The Canadian's recognized their good fortune and immediately  corralled the rebound and attacked the USSR with numbers.

After quickly gaining the zone, Edmonton's Mark Messier flew around the Russian net and found a streaking Normand Rochefort with a perfect pass, that the Quebec Nordique blueliner buried behind surprise starter Evgeny Belosheykin. Forty-three seconds in and Canada already had a monster save from their goaltender and an early one goal lead.

In what became norm throughout the series, the Soviets would respond quickly. Andrei Khomutov would even things up at the 1:27 mark, after Fuhr had been bumped out of position by a Russian skater mere seconds earlier. It was a nice break for the Russians but one that did not keep Canada from their game plan.

Canada kept coming in waves and suddenly the ice was heavily tilted. Doug Gilmour would score his second of the finals, as he finished off a great feed from Rochefort, which was proceeded by a lovely dangle from Wayne Gretzky, to open up all sorts of space for Gilmour to drive towards the Russian goal.

Both sides were playing at a frantic pace. It was fire wagon hockey at its very finest. From one end to another, the two teams exchanged chance after chance, as the speed of the games seemed to increase with each passing moment. For the first time in the finals, head coach Mike Keenan finally started using Mario Lemieux on a line with Gretzky, which didn't pay immediate dividends but would ultimately be the turning point of the series.

After watching Canada carry the play in the early going, the Soviets would respond with a furry on the man advantage but Fuhr shut the door with five or six stops within a matter of moments. It was an all out goaltending clinic from the Oilers star tender. The Russians did appear to finally sneak one past Fuhr late in the power play but referee Paul Stewart waved it off for goaltender interference. It was an iffy call, as the Canadian defenceman clearly pushed the Russian player into Fuhr.

In all honesty, it looked to be nothing more than a makeup call, for the non-call on the Soviets opening goal. Whatever the reason, the goal did not count and moments later, it would become a two goal cushion, courtesy of a wonderful play from two more Edmonton Oiler teammates.

With the Canada driving into the Russians end on what would eventually turn into a three-on-one break, Mike Gartner looked to have wasted the opportunity with a poor pass behind Gretzky but #99 kept the play alive with a sublime little stick check, to steal the puck from the stunned Russian blueliner. Seconds later he would find a streaking Paul Coffey, would made a pretty little deke, before making it 3-1 at the 12:41 mark..

Despite being held to only one goal in the opening frame, the Soviets would respond with two quick goals, midway through the second period. Vyacheslav Fetisov would score his first of the finals with Doug Crossman in the box for holding, as his point shot was inadvertently redirected by Rochefort into his own net. Just over two minutes later, they would tie things up at three, courtesy of yet another shorthanded goal, this time off the stick of Vladimir Krutov.

However, Canada wasted little time regaining the lead, as Gretzky and Lemieux worked a two-on-one break to perfection, with the big guy ripping home his first of the series on a perfect feed from the captain. From that point on, the Gretzky-Lemieux combo would become a regular fixture at even strength, as they had been all tournament long with Canada on the man advantage.

The Soviets would tie it up one more time, when Vyacheslav Bykov continued his stellar play, beating Fuhr on the short side with a perfectly placed backhand to make it 4-4, just before the five minute mark of period three.

Defenceman Alexi Gusarov would be sent off for tackling Brian Propp at the 9:52 mark and Canada would finally make the Russians pay on the man advantage. Lemieux would poke home Gretzky's cross crease pass to restore Canada's one goal lead and give #66 his second on the night and #99 his fourth assist.

To the Russians credit, they would comeback yet again and just as Canada did in the series opener. Valeri Kamensky's brilliant individual effort, which was likely the goal of the tournament, made it 5-5 with just over a minute remaining and sent this one into an extra session.With all the attention Canada put towards shutting down the KLM line five-on-five, it was the likes of Kamensky, Bykov and Khomutov that were coming up huge for the Soviets.

Unlike Game One, there would be no early winner as both sides tightened things up in the extra frame. Canada generated little in the way of quality chances, whereas Fuhr was called upon to make a couple of big stops, as the Soviets were the better side in period number four but were unable to find the series winner.

The Russians continued to carry the play in the early stages of the second overtime period but Fuhr stood tall, stopping everything fired his way and giving his team a chance to find their legs and hopefully...the OT winner

After generating nest to nothing over a period and a half of overtime, it would be Gretzky and Lemieux who would combine, one more time, to save the day for Canada. On what was almost a carbon copy of Mario's second goal, the Penguins centre chipped home another cross crease pass from the Great One, up and over Belosheykin, to keep Canada alive and force the Soviets into a winner take all battle in Game Three.