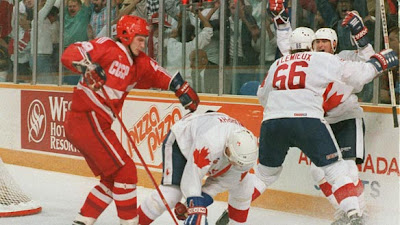 Or would it be the best line on the planet, of Krutov, Larionov and Makarov, that would overwhelm a tiring Canadian side? So many questions and possibilities but one thing fans could almost certainly count on, was another classic game to decide what had been a remarkable series. How could anyone expect anything but the very best, from these two powerhouses?

While Canada came out flying in Game Two, in a must win situation, and jumped out to a 3-1 first period lead, the Soviets would return the favour in the series finale. They scored three times in the opening eight minutes to deflate a sold out Copps Coliseum crowd.

After allowing the Russians quality scoring chances at the start of nearly every period over the first two games and watching Grant Fuhr come up large time and time again, this night would be different. The Oilers netminder would be beat twenty-six seconds in by a wide open Sergei Makarov, thanks to a brutal giveaway by Gretzky behind the Team Canada net.

Six and a half minutes later, defenceman Alexei Gusarov would rip an absolute rocket past Fuhr, to make it a 2-0. Fifty four seconds later, Canada would allow Vyacheslav Fetisov to skate through the Canadian zone untouched and the all world defenceman made it 3-0.

Having run the last two games with two of Gretzky, Lemieux, Mark Messier and Glenn Anderson on the ice for at least 75% of the time, Mike Kennan's star players were starting to look a little worn down. While they were continually rotating in the likes of Mike Gartner, Doug Gilmour, Dale Hawerchuk, Michel Goulet, Brent Sutter and Brian Propp, it was the big four that were doing much, if not all, of the heavy lifting.

Kennan decided to insert Rick Tocchet back into the lineup for the final, despite the rugged Philadelphia Flyer forward still not being fully recovered from a left knee injury. It was pretty obvious Tocchet should not have been playing but the fact he decided to gut it out and give it shot, ended up being huge for Canada in the end.

As had been the case in both Games One and Two, no lead appeared to be safe and Canada started to make yet another long climb back, thanks to the aforementioned "less heralded" players on their roster. With Canada's top power play unit struggling to create much of anything, Kennan decided to simplify things a little, by sending Tocchet out on the man advantage.

The  Scarborough, Ontario native did not disappoint, knocking a lose puck behind starter Sergei Mylnikov, getting Canada on the board with a power play marker. Six minutes later, the lead would be down to one, thanks to another goal from a Philadelphia Flyer, this one coming off the skate of Brian Propp. It wasn't pretty but some hard work down low from Tocchet  and a hard nosed wrap around attempt from Sutter, that found it's way over towards Propp and bouncing into the back of the Soviet net.

However, the Russians would restore their two goal cushion, thanks to a non-call on what was a clear hooking infraction against Makarov, that sent Raymond Bourque to the ice inside his own blueline. With Bourque laying on the ice, Andrei Khomutov would pick up the lose puck and put a lovely little deke on Fuhr, before sliding home his third of the series. Certainly not the opening period Canada had envisioned but they had no time to feel sorry for themselves.

The Soviets came out looking for that back breaking fifth goal in period two but Fuhr rebounded nicely from a rather tough opening twenty minutes, making a number of crucial stops to keep Canada within striking distance. They would make the most of their netminders efforts, as the Gretzky/Lemieux tandem struck again, to get the lead back to one. Gretzky found a pinching Larry Murphy with his usual perfectly placed feed from behind the Russian net, for yet another power play goal.

That goal seemed to re-energize what was clearly a Canadian side on their last fumes but it was two more goals from "grinders", that eventually completed the comeback. Winnipeg Jets centre Dale Hawerchuk was coming off what was easily his finest performance of the tournament and he took that to another level in the series clincher. Doing his best Gretzky-like imitation, the than twenty-four year old set up Sutter with an almost carbon copy feed of the one Gretzky had just laid out for Murphy.

Four minutes later, he would give Canada their first lead of the night with his fourth goal of the tournament, after a timely hit from Sutter caused a turnover behind the Soviet net. In what was a rather interesting turn of events, Canada had reverted back to their more traditional hard nosed style of hockey, after being carried throughout the finals by the artistry of #66 and #99. There was nothing pretty about Team Canada's game on this night but it was proving to be rather effective.

Having watched their three goal advantage disappear over the previous thirty minutes, it was now up to the USSR to try and pull another rabbit out of their hat and find that tying goal over the final twenty minutes. The two sides went end to end to start the third period, as Gretzky seemed to find his second wind and was a threat every time out, in hopes of finding that insurance marker.

However, to no one's surprise, that cushion never came, as the Russians would find the equalizer, as Game One overtime hero Alexander Semak would strike again, pulling the Soviets level at five goals a piece. Should we really have expected anything different? It seemed almost fitting. With just over seven and a half minutes remaining, it looked as though these two great teams were headed for their third consecutive 6-5 outcome.

All that was left to play out, was whether or not the two sides could make it three consecutive overtime games or if someone would step up late and forever become immortalized as the hero of the 1987 Canada Cup. Luckily for Canada, both Wayne Gretzky and Mario Lemieux had one more magic moment left to deliver.

With Dale Hawerchuk set to take a crucial face-off to the left of Grant Fuhr and only 1:36 remaining in regulation, the Jets centre managed to knock the puck over to Lemieux, who pushed it up the boards and out of the Canadian zone, to the waiting stick of #99. What looked like a routine face-off in the defensive zone, turned into a three-on-one break in a blink of an eye.

The rest, as the say, is history. With Gretzky having no real intention of using the streaking Larry Murphy as his ultimate target, the defenceman's will timed rush gave the Great One a little more time and space to do his thing, before laying off a perfect feed to Lemieux, who buried the winner at 18:34. In a matter of ten seconds, the two premier players in the National Hockey League teamed up one last time to put Canada over the top.

There are those out there that contend that Hawerchuk should have been whistled down for hooking Bykov, as he was trying to close on Lemieux, prior to receiving Gretzky's pass. While there may be some merit to that, it was no worse than the non-call that led directly to the Soviets fourth goal.

At the end of the day, Canada's star players came up huge when it mattered most but the fact hockey fans everywhere were given the privilege of watching arguably the two greatest players to have ever played the game, is what made this series so special. Nothing in the storied history of this great game, before or since, has ever rivaled what these two great teams gave us over those three magical nights back in early September 1987.