Schultz and the AHL, could be a huge bonus for the Oilers 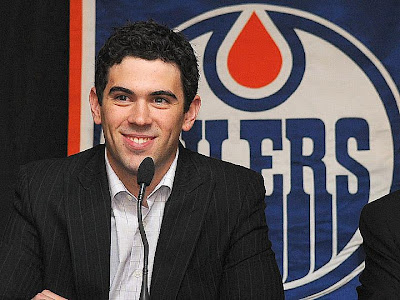 With the NHL Lockout is looking as though it could keep players from entertaining fans across North America for some time, the Edmonton Oilers are one of the few clubs that may actually benefit from the work stoppage. With the club's core group of players all still working on their first pro contracts and with Taylor Hall still recovering from off season shoulder surgery, the halt in NHL action couldn't have come at better time...if there ever is such a thing.

The time away will not only allow a guy like Hall more time to heal but also give the organization the opportunity to send many of their young prospects down to the Oklahoma City Barons of the American Hockey League for a little more seasoning. While no one will likely get a better shot at impressing the Oilers brass than winger Magnus Paajarvi, who may find himself on the Barons top line with Ryan Nugent-Hopkins and Jordan Eberle, the player who may benefit most could be defenceman Justin Schultz.

To say this kid will have some pressure on when he finally steps out onto an NHL rink, would be putting it nicely. With his well publicized decision to leave the Anaheim Ducks and test unrestricted free agency, the twenty-two year old has proceeded to put a rather large target on his back. Hence, why a little time down in the AHL could do the youngster a world of good.

You would be hard pressed to find those who feel Schultz won't develop into a top flight NHL blueliner for years to come. He has all the tools but the likelihood of the University of Wisconsin standout not having his fair share of growing pains during his rookie campaign, are slim at best. By starting out his pro career in OKC, Schultz will get the chance to not only adjust to playing the pro game but also have the opportunity to form some chemistry with the likes of the Nugent-Hopkins, Eberle and Paajarvi.

Barons head coach Todd Nelson has already hinted at using the talented rearguard as his horse on the power play, teaming him up with the aforementioned Oilers and probably  Teemu Hartikainen, to round out a potentially potent  five man unit. As tough as that group might be for teams to handle, it's that chance to build some sort of rapport with  RNH and Eberle before ever setting foot onto an NHL rink together, that would be simply invaluable.

While Edmonton have lofty expectations for the forty-third overall selection of the 2008 NHL Entry Draft, they are not expecting Rome to be built in a day here. Unfortunately, that may not be the case with fans across the National Hockey League and some media personnel throughout North America. Schultz could expect to feel the wrath of Ducks fans for years to come but there are already those in the media, that have given the impression, they would be more than alright with seeing the kid fall flat on his face.

Many were not happy with how Justin decided to leave Anaheim and essentially "screw over" the franchise that drafted him but essentially, he did nothing wrong. Circumstances being what they were, allowed him to look elsewhere and no one should hold that against a player. The situation dictated he had certain rights and those rights should not be ignored because he was just twenty-one years old and had yet to play a single second in the NHL. It was a tough break for the Ducks but not something that came completely out of left field.

Regardless of what jersey he ended up wearing, learning to play defence at the NHL level will be a challenge but doing it on one of the league's thinnest bluelines, will make it even tougher. Making his time in Oklahoma City, all the more important. Granted playing at in the NHL and AHL are far from the same thing but taking the step from collegiate hockey to the pro game is a  massive leap and if Schultz can workout some of his initial struggles in a Barons uniform, as a opposed to the Oilers orange and blue, both club and player would be far better off for it.

With all due respect to the Minnesota Wild, no franchise had a better summer than the Edmonton Oilers. They not only selected Nail Yakupov with the first overall pick at the 2012 Entry Draft but went two for two on their "to do list", by winning the "Justin Schultz Sweepstakes" and having the youngster put pen to paper and sign on with the Oil. Adding those two, to the existing trio of Hall, Nugent-Hopkins and Eberle, gives Edmonton as good a core group of young players that you will find.

With that being the case, the time has come for this team to to start showing what they are made of, This season, whenever it actually does get under way, the pressure goes up a notch or two and continually losing games will no longer be accepted. The Oilers need to take that first real step forward and adding Justin Schultz into the mix, with already having "X" amount of games under his belt, will do nothing but help that process along.
Posted by Oil Drop at 11:54:00 pm