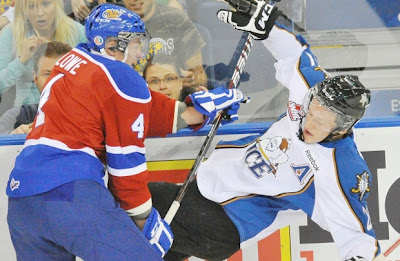 After celebrating their 2011-2012 Western Hockey League championship season with a banner raising pre-game ceremony, the Edmonton Oil Kings kicked off their 2012-2013 campaign with a highly entertaining 5-3 victory over the Kootenay Ice in the WHL's season opener. Defenceman Keegan Lowe led the charge with a three point night and a "Gordie Howe Hat Trick", while Michael St. Croix added a goal and an assist.

While the banner raining ceremony left the Rexall Place crowd of 10,976, just waiting for a reason to explode, the Oil Kings wasted little time in getting the party started, as St. Croix opened the scoring just over a minute in. A costly neutral zone turnover led to Mitch Moroz skating, untouched, into the Kootenay zone and while his initial shot on goal was stopped, St. Croix had little trouble depositing the ice breaker into the wide open Kootenay cage for the early lead.

Just over a minute and a half later, newcomer Brandon Baddock made it 2-0 when his innocent looking shot found it's way through Ice starter Mackenzie Skapki. Not exactly the start the new Kootenay netminder was hoping for but the Oil Kings couldn't have asked for much more.

Despite being badly outplayed in the opening fifteen minutes, the visitors fought back, cutting the lead to one, on just their third shot of the period. Joanthan Martin deflected home Joey Leach's point shot, up and over a helpless Laurent Brossoit, to make it 2-1. A missed body check and a poor clearing attempt from Griffin Reinhart, only seconds before Leach's attempt on goal, proved rather costly.

However, Edmonton would restore their two goal cushion before the period was out. Lowe's seeing eye point shot, found it's way past a screened Skapki, with 1:01 left on the clock, to make it 3-1. Nothing hurts a team more than giving up goals early on or in the dying minutes of a period and unfortunately for the Ice, they allowed three in the opening frame.

Early in the second, Defenceman Tanner Muth would cut the lead back to one, as his harmless looking point shot floated past a surprised Brossoit, just as Kootenay finished killing off a too many men on the ice penalty. The Oil King netminder seemed to lose sight of the puck but from that far out, that's a stop Brossoit has to make.

Once again, Edmonton would make it a two goal bulge, as Henrik Samuelsson punched home a loose puck at the 12:14 mark, for his first off the season and the Oil Kings first power play marker of the night. The Ice would respond with a power play marker of their own, as Brock Montgomery tipped Jagger Dirk's shot under Brossoit, with just under two minutes to go in the middle stanza.

Unfortunately for the Ice, a lucky bounce and some suspect goaltending from Skapki, led to Cole Benson's first of the season, killing any potential hope for a Kootenay comeback. On what was basically a nothing play, Benson sent a shot on goal from a sharp angle, that deflected off a Kootenay stick and behind the sliding Ice netminder. Unluckily for Skapki, the puck settled just behind him and one shift of the pad later, saw the young tender kick the puck into his own net. Tough break for the kid but one the home side gladly took, to make it a 5-3 game.
Posted by Oil Drop at 8:27:00 am