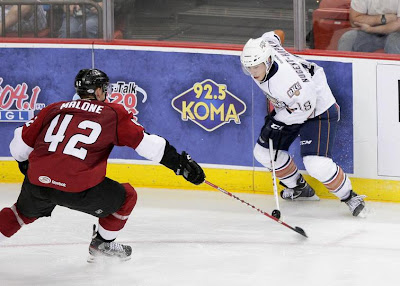 It was just  a matter of time before they started to click and unfortunately for the Lake Erie Monsters, that time happened to come during last night's 4-3 loss to the Oklahoma City Barons. On the strength of four power play goals and three point efforts from Edmonton Oilers youngsters Jordan Eberle, Ryan Nugent-Hopkins and Justin Schultz, the Barons improved to 3-2 on the season, good enough for second spot in the AHL's South Division.

After being rather quite, on the scoresheet, during their four games of the season, the Oilers dynamic duo led the charge on what has been a rather mediocre looking power play. In what turned out to be an all Edmonton looking man advantage for most of the night, the three kids also saw Magnus Paajarvi and Teemu Hartikainen both play a huge role in the win.

While Paajarvi only had a single assist on the night, the talented Swede was a force on the PP throughout the contest and was on the ice for all four goals. As the games start to go by, the smooth skating Paajarvi looks to becoming ore and more comfortable playing alongside his Oiler mates and saw time killing penalties with Eberle.

As for the Nugent-Hopkins-Eberle Show, it was just a matter of when not if. After trying to do almost too much through the first week of the season, the two decided to simplify things and saw instant results. After falling behind early 1-0, Nugent-Hopkins evened things up with his first on the season, at the 9:33 mark. The former first overall selection, took a a quick feed from Eberle, after the Oilers 30 goal man gained the Lake Erie blueline on the man advantage.

Eberle would be next, carrying the puck in from the blueline before firing a shot from between the ciccles and past a partially screened  Calvin Pickard, to knot things up at two. Hartikainen would give the Barons their first lead of the night late in the middle stanza, banging home a loose puck off Paajarvi's point shot.

The Monsters wasted little time getting that one back, as Bryan Lerg would score his second of the night, beating Yanis Danis with a nifty wraparound, to square things at three with the final period still to come.

The Nuge would play the role of hero on this night, snapping home his  second of the night, after corralling a loose puck that jumped off Eberle's blade, to make it 4-3. Schultz picked up his third assist of the night on the winner and seemed to have instant chemistry with Eberle, who was switched over the young blueliner's side on the man advantage. With his three point night, the newest addition to the Edmonton Oilers blueline now sits in a tie atop the American Hockey League scoring race with nine points in five games.

Danis did the rest, making a number of crucial stops in the dying minutes, as the Barons were rather careless with the puck in the closing moments.

With the win, OKC split their four game set with Lake Erie and will now look to a new challenge, as they play host to the Houston Aeros on Friday night. Much like their home and home set with the Monsters, Oklahoma will take on the Aeros three times over the next week, only difference being, all three contests will be played at the Cox Convention Center in Oklahoma City.
Posted by Oil Drop at 7:36:00 am