Oil Kings make it two in a row, with comeback victory 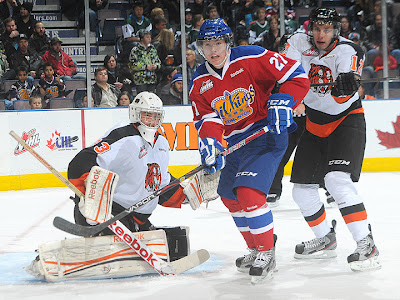 It had been just over three weeks since the Edmonton Oil Kings had last won back-to-back games, after starting the season on a three game winning streak. That drought finally came to an end on Saturday night, as the Oil Kings made it two wins in as many nights, doubling the Medicine Hat Tigers by a score of 4-2. Curtis Lazar scored his seventh and eighth goals of the season and another strong performance from defenceman Keegan Lowe, paced Edmonton to their second win of the season over the Tigers.

It looked as though the Oil Kings were headed for yet another night of disappointment, as Medicine Hat put two pucks behind Laurent Brossoit in the opening fifteen minutes...putting Edmonton behind the eight-ball.  That two goal cushion would hold up until the midway point of period two, when the Oil Kings started their comeback.

Lazar would cut the lead in half, deflecting home his second power play marker of the season. Just over six minutes later, Edmonton Oilers second rounder Mitch Moroz would get the Oil Kings back on even terms, scoring his second of the season on a breakaway, courtesy if a gorgeous pass from Lowe. After a less than promising start, Edmonton things over in period two, outshooting the Tigers 13-5 and making it anyone's game heading into the final frame.

Rookie Edgars Kulda would play the role of hero on this night, as his shot found its way through former Oil Kings netminder Cam Lanigan, for the first goal of his WHL career. Lazar would close out the scoring with his second of the night, into an empty net.

Despite the win, the Oil Kings remained a point back of the Calgary Hitmen, for top spot in Western Hockey League's Central Division. The Hitmen continued their early season scoring tear, edging the Vancouver Giants 5-4, on the strength of Cody Sylvester's first career hat-trick.
Posted by Oil Drop at 12:46:00 am