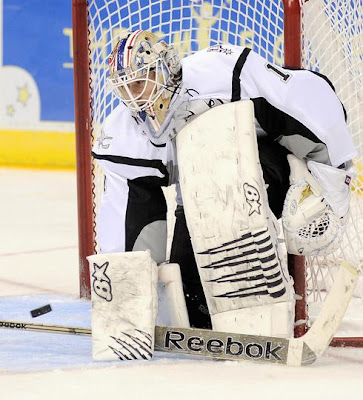 Playing the third game in as many nights, the Barons seemed to be missing that extra gear in their attack, despite adding Taylor Hall back into the starting lineup. Head coach Todd Nelson was actually hoping to get a little spark from the Oilers trio, by re-uniting Hall with Jordan Eberle and Ryan Nugent-Hopkins on OKC's top line. Unfortunately, all three were a little flat, with Hall's three shots on goal being all they could muster.

Unlike their previous two outings, Oklahoma would not have the opportunity to blow another three goal lead,,,as they were unable to get one behind Grumet-Morris. While the visitors held the advantage for much of the night on the shot clock, it was the Rampage who generated the better chances.

Olivier Roy got the nod in goal for the Barons and did his best to keep his team in it but they would finally solve Roy just past the midway point of period two. With defenceman Colten Teubert off for interference and San Antonio on their third power play of the night, Alex Petrovic score his first on the year, finishing a lovely passing play to break the scoreless draw.

Oklahoma did not lack chances on the night, as they were given the next three power plays and wound up going 0-for-5 with the man advantage. While San Antonio would not get another until late in the third but they made the most of it, as Colby Robak's point shot was re-directed by a helpless Roy.

With the loss, the Barons went 1-1-0-1 during their hectic weekend and now sit with a 5-4-0-1 record on the season. That is good enough for seventh place in the Western Conference but leaves them just four points behind the first place Charlotte Checkers.

Nelson and his staff will look to right the ship but more importantly, give his guys some rest. After playing on three consecutive nights, the Barons are not back in action until Friday night, when they pay a visit to the Abbotsford Heat for a two game weekend set.
Posted by Oil Drop at 5:37:00 am