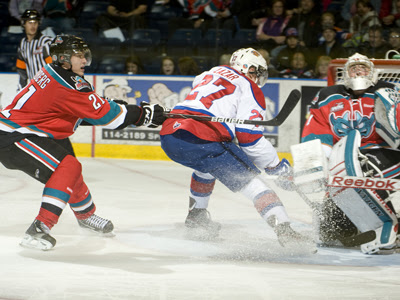 Shmoorkoff had Edmonton off and running, scoring in the opening five minutes of action but Kelowna wasted little time in getting that one back, courtesy of an absolutely dreadful line change by the Oil Kings. Tyson Baillie would score his sixth of the campaign, as the visitors were caught on a two-on-nothing break, all of two minutes after grabbing the lead.

Just over sixty seconds later, the Rockets would grab their first lead of the night, thanks to more sloppy play from Edmonton. Defencemen Griffin Reinhart and Cody Corbett inexcusably allowed both Henrik Nyberg and Zach Franko to get behind them, leaving Brossoit to deal with what was essentially a two-on-nothing from the top of the crease. Nyberg would slide home his third of the season and suddenly the Oil Kings found themselves trailing.

Kelowna would return the favour in the opening seconds of period two, as Klarc Wilson found a wide open Travis Ewanyk in front of the Rockets goal for a easy tap in, to square things up at two. The goal was Ewanyk's fourth of the season, as Edmonton's bottom six forwards continue their recent trend of contributing offensively, on a regular basis.

After the Oil Kings early equalizer, neither side created much during the middle frame, though Jackson Whistle robbed Brandon Baddock, late in the period, with a sliding beautiful pad stop. All things considered, Edmonton were staring at a third consecutive victory, that could easily have been had with a solid third period. Unfortunately, the Rockets had other intentions and swarmed Brossoit early in period three and were rewarded with the go-ahead marker.

On what was essentially a nothing play,  Riley Stadel's point shot hit defenceman Ashton Sautner and bounced directly to Chartier, who wired the loose puck behind the Oil Kings puckstopper, to restore their one goal lead. It was bad bounce for the visitors but one the Rockets had earned.

Kelowna had chances to extend their lead but Brossoit kept his team in it, making a couple of huge stops in tight. Edmonton would get their first power play chance of night late in the period but mounted next to nothing with the advantage. However, with just under four minutes to play the Rockets nearly handed the Oil Kings the equalizer but Whistle stoned Ewanyk on the doorstep, after Henrik Samuelsson decided to pass up on a wide open look in front.

The Oil Kings through everything but the kitchen sink at the Kelowna netminder in the dying seconds but Whistle stood tall, making consecutive stops off T.J. Foster, Curtis Lazar and David Musil to secure the victory.

With the loss Edmonton falls to 11-5-1-2 on the season and sit two points back of the Calgary Hitmen atop the Central Division standings, who edged Moose Jaw 2-1 on Wednesday night. The Oil Kings are now 2-2 on their current six game trip and well close it out with a pair of games against the Prince George Cougars on Friday and Saturday night.
Posted by Oil Drop at 8:35:00 am