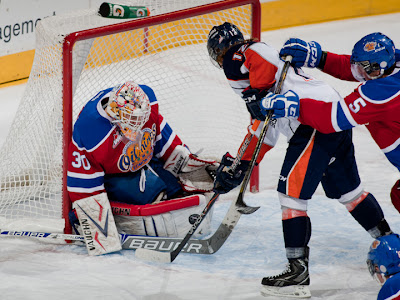 Jarry turned in a spectacular performance, stopping thirty-seven on the thirty-nine shots fired his way, including, an incredible twenty-four save second period, leading the Oil Kings to a 5-2 victory over the visiting Kamloops Blazers. Forward Henrik Samuelsson led the charge upfront with a pair of goals, while Curtis Lazar continued his recent resurgence, scoring for sixth time in his last five games.

Having done Edmonton the favour of beating the Calgary Hitmen in a shootout on Tuesday night, the Blazers had next to no jump out of the gate and the Oil Kings took full advantage. After carrying the play for much of the period, Edmonton would strike first, as their league leading power play continued to make an impact.

Lazar notch his fourteenth of the season and fourth power play marker in the month of December, to give the Oil Kings the early jump on the Blazers. Likely the start head coach Derek Laxdal was hoping for but the middle stanza would be far from textbook for the home side.

It was a period that saw the Blazers not only out shoot the Oil Kings to the tune of 25-9, have two separate opportunities on a two man advantage but it was one of the rare occasions that Edmonton had been out and out dominated in their own barn. Aaron Macklin managed to stuff home his first of the season behind Jarry at the 13:40 mark but the period belonged to seventeen tear old netminder.

The Western Conference leading Blazers came in waves but nothing seemed to fluster the Oil Kings tender. Even after giving up the equalizer, earlier in the period, Jarry pulled off the save of the night, absolutely stoning Brendan Ranford on a 2-on-0 break, with a stunning blocker save. A brilliant stop and one that would ultimately change the complexion of the entire game.

Only minutes after watching their netminder save their collective you know what, Edmonton would repay him with a go-ahead goal. Keegan Lowe's point shot took a fortunate bounce of a Blazers player and directly to a wide open Cole Benson, who one-timed his third of the season. Despite being thoroughly dominated for much of the period, the defending Western Hockey League champs went to the dressing room with their lead still intact.

Two third period goals from Samuelsson would seal the deal, as the Phoenix Coyoetes first rounder scored for the second straight game, after having gone goalless in his previous three. Kamloops Tim Bozon would get one of those back, beating Jarry with a gorgeous wrist shot, to make it a two goal game.

Edmonton wasted little time responding, as Mitch Moroz would close out the scoring, all of twelve seconds later, deflecting home Cody Corbett's point shot up and over Cole Cheveldave, who deserves props for paying homage to Edmonton Oilers Hall of Famer Grant Fuhr. The Blazers netminder was wearing his Fuhr styled mask and pads, circa 1987-1988.

Jarry improved his personal record to 8-3 on the year and sits among the league leaders with a 1.65 GAA and a sparkling .933 SV%, albeit in limited duty. This coming on the heels of being selected as one the players who would be taking part in the 2013 Top Prospects Game at the Halifax Metro Centre, on January 16th.

The young puckstopper was not the only Oil Kings player chosen to take part in the yearly event, as Lazar was also one of the 40 CHL players that were announced to the public on Wednesday afternoon. While the talented winger has had a rather inconsistent season, he still remains a highly touted prospect and is believed to be a player that would likely be selected inside the top ten, at the 2013 Entry Draft.

With the win, the Oil Kings remain a point behind the Hitmen for top spot in the Central Division, as Calgary edged the Red Deer Rebels by a score of 2-1 in other WHL action. Edmonton was not just missing the services of their starting netminder but also captain Griffin Reinhart, whom like Brossoit, was attending the Team Canada selection camp in Calgary.

The news will only get worse from here for the Oil Kings, whom will also lose defenceman David Musil to the Czech Republic on Thursday afternoon. It is an unfortunate break for the defending Western Hockey League champions to lose three key players at a pivotal point of the season but it says a lot about the talent level within the organization, that they are more than capable of surviving those losses in the sort term.
Posted by Oil Drop at 1:16:00 am