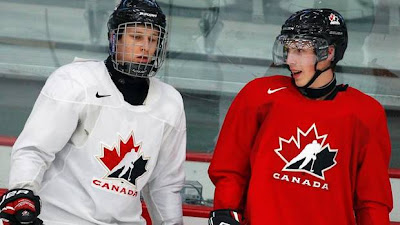 This notion that some have about Canada potentially losing almost half their roster, were the lockout to come to an end, is frankly non-sense. Outside of the Oilers star centre, who exactly would be at any sort of risk of being called away from Ufa, Russia? Perhaps the likes of a Jonathan Huberdeau, Boone Jenner or Mark Scheifele? How about Morgan Rielly, Matthew Dumba or Griffin Reinhart?

Give me a break.

Of the players just listed, not a single one would fall into the category of a "must have" for any of their NHL teams to start the season.  There is little doubt that the Oilers would recall the services of their number one centre, as soon as an agreement were to be reached, but even they might hold off. If Canada were on the verge of embarking on a semi-final or final matchup, one would think Edmonton might think twice about pulling the former first overall selection.

Especially when one considers the on-going relationship between Hockey Canada and the Oilers organization, most notably with General Manger Steve Tambellini and President of Hockey Operations Kevin Lowe.

While Huberdeau, Scheifele and probably Rielly, would be the only three that would even garner a regular NHL roster spot during a lockout shortened campaign, not one would be looking at playing a potentially crucial role on their club. Toronto Maple Leafs General Manger Brian Burke came out and said as much to the media on Tuesday afternoon.

Burke told Hockey Canada, that should the highly touted Rielly make the squad, he would remain with the club for the duration of the tournament. If anything, the experience from playing as the World Juniors would due them all a world of good. Pulling any of those guys in favour of playing in some sort of a supporting role for their individual NHL club, would not only be asinine but downright poor asset management by those organizations.

Team Canada would undoubtedly be taking a risk in selecting RNH to take part in the dance but at this stage of the game, how could they do anything but exactly that? The chances of the National Hockey League owners and NHLPA coming to any sort of agreement in the very near future, seems highly unlikely. Having said the, the potential does exist but from Hockey Canada's standpoint, it is a risk that would be more than worth taking.
Posted by Oil Drop at 3:31:00 am