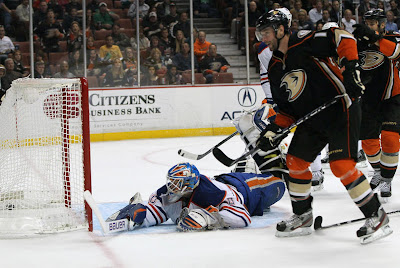 On a night in which the Edmonton Oilers caught a huge break, in facing the Anaheim Ducks without Ryan Getzlaf or Sheldon Souray, it was another former Oiler who came back to haunt his old club. A pair of goals from Radek Dvorak proved to be too much for Ralph Krueger's crew to overcome, falling by a score of 2-1 to the Pacific Division leading Ducks.

Netminder Devan Dubnyk was outstanding in defeat, making thirty-six saves on the night, including a number of crucial stops throughout the second period. Nick Schultz was the lone marksman for the visitors, scoring his first goal in Oilers silks, since being acquired from the Minnesota Wild at last season's Trade Deadline.

The evening was not so kind to former Ducks second round pick Justin Schultz, who was roundly booed whenever he touched the puck. The talented blueliner made his first trip to Anaheim since leaving the organization in favour of Edmonton, via free agency last summer. Schultz did not seem to be rattled in the least by the continuous jeering but was robbed on a couple of glorious opportunities by Jonas Hiller.

Edmonton was by far and away the better side in the opening ten minutes of play but were unable to sneak an early one behind Hiller. After being outshot 11-2 over the first eleven minutes of action, the Ducks poured it on over the next twenty-nine minutes. They peppered Dubnyk with twenty-six pucks over the next period and half, while the guy at the other end of the rink had all of three pucks fired his way.

After turning the tide midway through the first, the Ducks were rewarded with a late first period goal from Mr. Dvorak, giving them all the momentum moving forward. If not for a number of monster stops from the Oilers starting netminder, including a trio of point-blank stops off Corey Perry, Luca Sbisa and Bobby Ryan early in period two, this one would have been over ages ago.

Edmonton caught a break in early in the third, as Schultz simply through a puck on net from the sideboards and watched it deflect off the stick of Ben Lovejoy and go up and over an out of position Jonas Hiller. Just like that, Edmonton were back on level terms with just under nineteen minutes to go.

Unfortunately for the Oilers, Dvorak would strike once again, pouncing on another rebound and banging home his third of the year, in an almost carbon copy of his first period icebreaker. Edmonton kept pushing for the equalizer but were unable to find it, despite the best efforts of one Taylor Hall, who took his game to another level over the final twenty minutes.

Hall was ultimately not rewarded for his hard work but what was most alarming, was how few of his teammates followed his lead and raised their level of play. Then again, maybe it should not be that shocking. The one thing this season has proved without a shadow of a doubt, is that the ol' "give-a-crap-meter" in Hall is far greater than almost all of his teammates...combined.

The loss was Edmonton's third straight after winning five in a row and leaves them with a huge mountain to climb, if they still have any intention of qualifying for the 2013 NHL Playoffs. With nine games remaining on their schedule, seven of which that are on home ice, the Oilers find themselves four points out of the eighth and final playoff spot in the Western Conference.
Posted by Oil Drop at 8:52:00 am