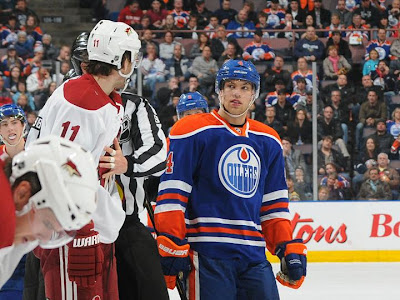 With their playoff lives in the balance, the Edmonton Oilers came out and played as flat a second period of hockey as a team could play, against the Phoenix Coyotes on Wednesday night. Those twenty minutes of play, coupled with a pair of terrible goals against on the part of Devan Dubnyk, proved to be too much for Ralph Krueger's side to overcome.

The crucial 3-1 loss keeps the Oilers four points back of the eighth place Detroit Red Wings but more importantly, the remain in twelfth place in the Western Conference, with only eight games remaining.After reeling off a season high five game winning streak, that temporarily saw them take over that final playoff spot, Edmonton has now dropped four straight...scoring a grand total of two goals over that stretch.

Nail Yakupov continues to impress, scoring the Oilers lone goal on the night, giving the rookie winger eight points in his last eight games. Yakupov has moved into third place in rookie scoring with twenty-three points, as he makes a late season push towards possibly becoming the first Edmonton Oilers player to ever capture the Calder Trophy, as the league's top rookie.

After the two sides played an up tempo but uneventful opening twenty minutes, Phoenix were handed the lead all of thirty-seven seconds into the middle frame. Having just missed the net on a point blank opportunity in the period's opening seconds, Boyd Gordon fired a shot on net from the corner boards, that somehow eluded the Oilers netminder.

It was obviously a tough break for Dubnyk, after what was a fairly solid first period, but  it was a blunder that could not have come a worse possible moment. The early goal against put what was already looking like a fragile side, back on their heels. To make matters worse, #40 would hand them their second gift of the period just over eight minutes later, courtesy of a god awful clearing attempt.

Dubnyk managed to find  Antoine Vermette with a "perfect" tap-to-tape pass, leaving the veteran centre a yawning cage to fire his ninth of the season in. Just like that, a scoreless game had turned into a two goal deficit and this group looked lost. To be honest, who could blame them?

Some will say the urgency in their game wasn't there, which is a fair point, but let's not forget this is a young team that is the midst of a losing streak...at the worst possible time of the season. In my mind, their poor second period had far more to do with being blind-sided by a pair of ugly goals.

As has been the case on many occasion this season, Edmonton came out with their best period when they had their back against the wall, unfortunately it wasn't enough. Both Yakupov and Taylor Hall kicked their game to another gear during the final frame, as Hall got under the skin of the entire Coyotes team, courtesy of a wicked slash to the leg of defenceman Zbynek Michalek.

They kept coming until the final buzzer but at the end of the day, falling behind a pair of goals to Dave Tippett's crew is rarely a recipe for success and last night was no exception. That being said, the offence wasn't there and if can't score goals, you won't win games. That simple.
Posted by Oil Drop at 9:43:00 am