Should the Oilers target the Blues and Bouwmeester? 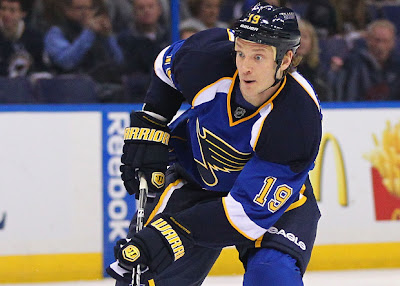 The St. Louis Blues were hoping the addition of defenceman Jay Bouwmeester, would help push Ken Hitchcock's team over the top during the 2013 NHL Playoffs. Unfortunately for them, that was not how things panned out, leaving the Blues blueline in somewhat of a precarious situation, heading into the off-season.

With Alex Pietrangelo and Kevin Shattenkirk both in need of contract extensions prior to the start of the 2013-2014 campaign and St. Louis in desperate need of help upfront, Bouwmeester's near $6.7 million cap hit could be a little much for the somewhat financially challenged Blues. Leaving teams like the Edmonton Oilers, wondering if the veteran blueliner could be had for the right price.

In acquiring the former third overall pick from the Calgary Flames, GM Doug Armstrong did not part with any major pieces but did give up defenceman Mark Cundari, Swiss goalie Reto Berra and a first round draft pick in this year's entry draft. Not exactly a king's ransom.

On top of Pietrangelo and Shattenkirk, the Blues must also deal with their top scorer, Chris Stewart, and second/third line centre Patrik Berglund both heading towards restricted free agency. That's four key pieces headed for what could be healthy increases, with Andy McDonald's $4.7 million hit being the only major number coming of their books.

As things currently sit, St.Louis have roughly $24.6 million in cap space, with sixteen players under contract. Problem being, that number is based on the projected $64.3 million cap. In 2013, the salary cap was $70.2 million but the Blues spent just a hair under $52.2 million. They are in no way shape or form a cap team, meaning that total of $24.6 million is probably closer to $15 million, in actual spendable money.

That number would likely allow them to sign the trio of Pietrangelo, Shattenkirk and Stewart but not much else. As a collective unit, the Blues play a very discipline defensive system, that generally involves them physically dominating many an opponent. While that style proves to be rather effective during an 82 game schedule, the lack of high-end skill among their forward group, has now come back to haunt them in consecutive post-seasons.

At some point, they need to address the scoring and moving Bouwmeester may be their best chance of doing so. While Hitchcock has been a fan of the twenty-nine year old's game for number of years, using the soon-to-be free agent as trade bait to acquire a skilled forward, may just be too hard to pass up. Especially when you consider, the former Florida Panthers standout may have no intentions of signing an extension in the Show-Me-State.

General Manager Craig MacTavish has little to no appetite in moving the likes of Jordan Eberle, Taylor Hall, Ryan Nugent-Hopkins, Justin Schultz, Nail Yakupov and by the sounds of it, you can probably include Sam Gagner in that group as well. That being said I still feel #89 could be had in the right deal, though this would likely not be one of them.

Leaving Ales Hemsky as the next best option. While the talented Czech would not be enough to get the deal done on his own, the addition of a 2014 1st rounder, should Bouwmeester agree to sign a long term deal with the Oilers, could be enough to perk the Blues interest. The deal would not only free up roughly $2 million for Armstrong to use elsewhere but also give him an in house backup plan, should the club and Stewart be unable to agree to an extension.

From Edmonton's standpoint, the addition of the towering rear guard would be exactly what the doctor ordered. Bouwmeester is a puck moving/minute eating machine, that plays in all situations. While not an overly physical defenceman, he rarely makes a mistake in his own zone and is more than capable of showing a kid like Schultz the ropes.

Part of the problem with targeting Bouwmeester, if you believe the stories out there, is his apparent unwillingness to play in his hometown. While he has never publicly stated as much, there may very well be something there. Having said that, the soon-to-be thirty year old may have softened his stance on playing in his backyard. Especially with this team looking to finally be headed in the right direction.

Ultimately, the decision on what to do with Jay Bouwmeester is in Doug Armstrong's hands. He could very well decide to build his backend around Bouwmeester and Alex Pietrangelo, leaving veteran Barret Jackman or possibly Kevin Shattenkirk, on the trade block. One thing is clear, the Blues are unlikely to head into the 2013-14 season with the same roster.

Regardless of the direction St. Louis decides to go, let's hope Craig MacTavish has his fellow GM's number on speed-dial.
Posted by Oil Drop at 11:07:00 am