Time for Teemu Hartikainen to prove his worth 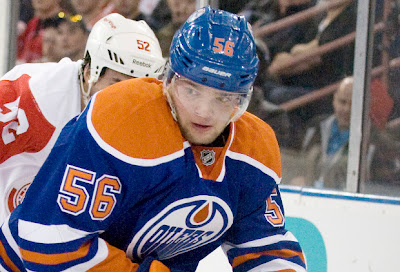 Teemu Hartikainen is on the verge of completing his third year of professional hockey in North America. He has steadily improved his all around game but has yet to leave any sort of mark, when given the chance to suit up for the Edmonton Oilers.

After receiving nothing more than spot duty with the Oilers in each of those three seasons, the time for the big Finn to earn a regular spot in the National Hockey League is fast approaching...be it in Edmonton or another NHL city.

During his first fifty-five games in the Alberta capital, Hartikainen has managed to score just six goals and thirteen points. The twenty-three year old has played virtually everywhere on the Oilers depth chart during his brief stints in the show but has yet to find his niche. There have been few legitimate opportunities for him to prove his worth but to be fair, his play has not warranted anything more than that.

The former sixth round selection was clearly a long shot pick back in 2008 but he looks to have all the makings of an everyday NHL player. A so-called diamond in the rough.

In his three seasons with the Oklahoma City Barons, Hartikainen has grown as a player and is currently playing a key role in the Barons playoff push, In fact, only cente Mark Arcobello has put up more points than the 6' 1' forward, during Oklahoma City's back-to-back extended post-season runs.

In the here and now, the priority is obvious, get OKC into the Calder Cup Final. The Barons start their Western Conference Championship series on Friday night against the Grand Rapids Griffins and will be trying to erase last year's memory of losing in five games to the Toronto Marlies. A strong showing from Hartikainen during crunch time, would go a long way in securing a possible contract extension from the Oilers.

General Manager Craig MacTavish would love nothing more than to slide the big-bodied Finn into a bottom six role come 2013-14. However, in order for him to do that, #56 will need to show he can consistently play with a physical edge to his game, while chipping in from time to time on the offence.

Should Hartikainen prove to be able to fill that need at even strength, you can bet he will see time on one of Ralph Krueger's power play units. He has shown to be more than capable of making life tough on AHL goaltender's during the man advantage and showed flashes of doing the same thing, during his cups of coffee in the NHL.

In all honesty, he is exactly what this team needs.

His foot speed remains a bit of a concern but whenever he gets his feet moving on the cycle or firmly plants himself in front of the opposing team's net, he becomes a handful to deal with. Plus, the kid has shown to have a decent set of hands in tight and a knack around the net. That being said, he has been next to invisible, on far too many night's, when given a shot to pull on the Orange and Blue sweater.

As previously mentioned, his opportunities have been limited and in certain games, flat out non-existent. However, it will be there for the taking in 2013-14. Be it as part of a fourth line rotation with Mike Brown and Ryan Smyth, on a potential third line with say Shawn Horcoff and Magnus Paajarvi.or as part of the "Nordic Trio" with Lander and Paajarvi.

Should the organization come to the conclusion Hartikainen is not the right fit, you can bet he will be shipped out-of-town as part of some sort of package. Be it at the draft or later in the summer, the feisty winger not be kept around, should MacT and company feel he's not ready to make the jump next season.

Either way, Teemu Hartikainen will get his shot at being an NHL regular. For Edmonton's sake, let's hope it will be as a member of the Oilers.
Posted by Oil Drop at 8:06:00 am