Oilers could benefit from a Clutterbuck for Pitlick swap 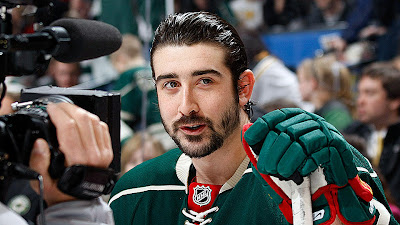 According to the Star Tribune's Mike Russo, the Edmonton Oilers have inquired about the availability of  Minnesota Wild winger Cal Clutterbuck. Russo, who is rarely, if ever, out of the loop when it comes to rumblings surrounding the Wild, mentioned Oilers prospect Tyler Pitlick as Minnesota's asking price for the hard-hitting restricted free agent.

While it's far from uncommon for an organization and their fan base to overvalue their "in-house" prospect pool, giving up on the thirty-first selection of the 2010 Entry Draft, for a bottom six energy guy, seems to be a rather steep price to pay. Yet on the other hand, maybe it's not to much to give up, for a general manager like Craig MacTavish, who is looking to reshape his roster overnight.

To his credit, Clutterbuck has managed to turn himself into a very useful NHL player, after entering the league as nothing more than a pest. Never one to shy away from body contact, be it clean or otherwise, the twenty-five year old has become far more than hitting machine.

In 346 career games, the former third round pick has put up 110 points, including 62 goals. He has become a regular fixture on the Wild's penalty kill, while seeing regular duty at even strength. His hard-nosed style of play and ability to get many an opponent off their game, Edmonton being one of them, is something this team has been lacking for years. In short, he is a physically engaged and overall more useful version of Ryan Jones.

However, with Clutterbuck having just completed a three year/ $4.2 million deal, which saw him earn $1.7 million in 2013, he is two years away from unrestricted free agency. With Edmonton having more than its fair share of high-end talent to fit in under the NHL Salary Cap, starting in 2014-15, does having a $2 million bottom six energy guy make financial sense?

Making the decision to move a guy like Pitlick, a bit of an iffy proposition. At twenty-one year's of age, the former Medicine Hat Tigers standout, could still turnout to be that big-bodied third line centre. Having said that, his first two seasons in the AHL have been less than impressive.

The other thing to consider, should the Oilers end up selecting a centre in the first round of the 2013 NHL Entry Draft, be it a Sean Monahan or a Curtis Lazar, Pitlick would likely be knocked down another notch on the old depth chart. Keeping that in mind, perhaps now would be the time to look at moving him, instead of waiting and watching his trade value diminish.

Craig MacTavish would likely want a little more than Cal Clutterbuck in a return for a twenty-one year old prospect like Tyler Pitlick but should Minnesota general manager Chuck Fletcher be willing to add in a late round pick or possibly even Zenon Konopka, the Oilers rookie GM might have to seriously consider pulling the trigger.
Posted by Oil Drop at 11:03:00 am