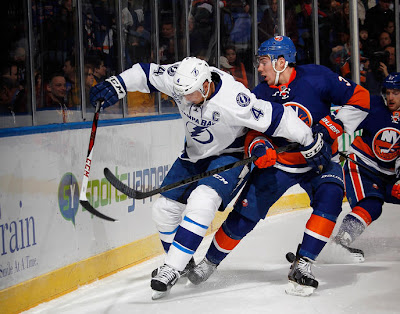 The Tampa Bay Lightning made it official yesterday afternoon. They did the somewhat unthinkable and went ahead with what was likely the toughest decision in club history. Longtime captain Vincent Lecavalier is on his way out of town, courtesy of a compliance buyout, that will see the former face of the franchise depart with a $32 million parting gift for his troubles.

With his $7.7 million cap hit no longer an issue, one would think, there were twenty-nine NHL general manager's wondering just how good the veteran centre would look in their city. Craig MacTavish is undoubtedly one of those thinking long and hard at taking a possible run at the twelve time twenty goal man on July 5th. Lecavalier would be a perfect fit in Edmonton but are the Oilers a fit for the former Stanley Cup winner?

While the former first overall selection is no longer considered among the best players in the game, he still has quite a bit to offer. With thirty-two points in thirty-nine games, Lecavalier put together another solid season as the Lightning's second line centre...just not one worth a $7.7 million cap hit. It's not as though Steve Yzerman and company no longer had any use for the two-time forty goal man. This was a decision driven by money and nothing else.

The thirty-three year old, had taken to the role of being the Bolts "tough minutes" guy, while the likes of Martin St.Louis and Steven Stamkos carried the load offensively. Lecavalier has turned himself into a fairly reliable option in the faceoff dot, registering a 50% or greater percentage in four of the last five seasons, including a career best of 54.4% in 2013. Despite his somewhat limited opportunity at even strength, Tampa Bay's #4 continues to be productive on the man advantage, trailing only Stamkos in power play snipes.

Once you add his leadership abilities and style of play into the equation, you would be hard pressed to find a guy that suits the Oilers needs any better.

It's no secret what Edmonton will be looking to add upfront, in hopes of pushing their young core over the top and back into the playoffs. They need to add size, a veteran presence and a legit two-way centre within their top six. Typically those things are hard to find, be it via free agency or trade. However, Lecavalier fills all three of those needs.

Be it as a centre on a line with Sam Gagner and Nail Yakupov or lining up on a potentially dynamic trio with Yakupov and Taylor Hall, Mr.Tampa Bay Lightning would be a scary good fit in the Alberta capital. The former Olympian would not only allow head coach Dallas Eakins to move Gagner to the wing but also lighten the load on a kid like Ryan Nugent-Hopkins. In my mind, the addition of player like Lecavalier would not only do wonders for the development of Nugent-Hopkins but also allow him time to recover from off-season shoulder surgery.

As previously mentioned, the Oilers will not be alone in pursuing the thirty-three year old on July 5th and one has to wonder if coming to Edmonton would even hold any interest to a player like Lecavalier. From a hockey standpoint, it would make perfect sense. He would be handed a prominent role on an up and coming team and see regular duty with some of the best young players in the game. However on a personal level, going from Tampa Bay to Edmonton could be a far tougher sell.

Lecavalier is married with two small children and probably doesn't have Edmonton high on his destination list. Having said that, you never know. Perhaps they consider the move of living and playing in a hockey environment and end up loving the city. However, with a Cup already in his backpocket, no shortage of potential suitors and a $32 million payout about to come rolling in, the odds likely are not good.

Regardless of the outcome, the Edmonton Oilers will take a run at acquiring Vincent Lecavalier. At the end of the day, Craig MacTavish may not be able to get him signed but he would not be doing his job, if he didn't give it the old college try. Though knowing what we do about the Oilers rookie GM, it wouldn't shock me in the least, to see Lecavalier in Orange Blue come next September.
Posted by Oil Drop at 10:10:00 am