There is no way this team, should be this bad 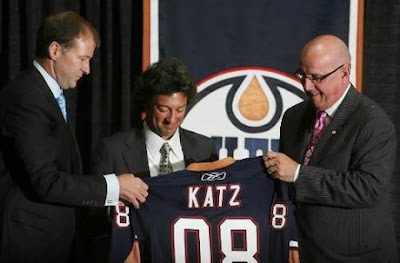 There are those who feel the Edmonton Oilers organization is generally given a free ride by local sports media. With that said, many across Oil Country were thrilled to see Edmonton Sun columnist Terry Jones take a run at the likes of President Kevin Lowe and owner Daryl Katz in his Monday morning piece - “Oilers Should Wear It”.

With the climate being what it is in this neck of the woods, large segment of the fan base felt this sort of thing was long overdue. While no one could or should be overly pleased with how the first thirty-eight games of the Oilers 2013-14 campaign has gone, when it comes down to it, there is no question this edition of the Orange and Blue is better from a personnel standpoint than the previous seven that have all missed the playoffs.

That is what the real issue is. This isn’t about Dallas Eakins and the current edition of players. It is about this once proud franchise on the precipice of missing the playoffs for an eighth consecutive season. Frustration is at an all-time high and not surprisingly, the target has been firmly placed on the guy who has been here through it all and his good buddy that happens to also own the hockey club.

When an organization has done as much losing as this one has over the last number of years, questioning everything from top to bottom should be fair game. However, as the old saying goes, re-builds suck and this franchise was in desperate need of one for ages. They begrudgingly entered a full blown re-build following a disastrous 2009-10 campaign and things have been pretty tough ever since,

Depending on what side of the fence you sit on, this is either year eight or year four of this re-build. Regardless of which side you are on, this should have been the year of legitimate progress in the standings. Unfortunately, the roster Craig MacTavish started to reshape during this past off season has badly under performed.

Are there still obvious holes within this lineup? Of course but filling those holes proved to be much harder than most thought it would be, including MacT himself. I’m pretty confident in saying the Oilers rookie GM tried upgrading his blueline all summer long but was unable to find a willing dance partner. That said, heading into training camp, Edmonton’s backend looked to be better, at least on paper, than it had in sometime. Far from perfect but definitely a step in the right direction.

While MacTavish did manage to add the likes of Andrew Ference, Luke Gazdic, Boyd Gordon and David Perron, all who play a grittier/tougher style of game, the Oilers remain arguably the easiest team to play In the entire National Hockey League. Though when you couple the additions that were made with their core group being a year older, there is no valid reason for this roster to have not competed for a playoff spot all season long. You can lay blame solely at the feet of management if you would like but as a collective whole, these players haven’t been good enough.

Is it Kevin Lowe’s fault that the Oilers received ECHL level goaltending for the first six or so weeks of the season? Is it on Daryl Katz that the vast majority of these guys seem unwilling to commit to a style of play that is necessary to be successful in today’s NHL? At some point, players have to produce and if they don’t, changes need to be made.

That’s not to excuse moves management has made, like trading away Ladislav Smid for no good reason and then expecting your already paper thin blueline to not suffer the consequences. How about not bothering to insulate their top players with experience that is still capable of playing major roles on a playoff team?

There is more than enough blame to go around for what is wrong with the Edmonton Oilers. There will unquestionably be more changes coming between now and the start of the 2014-15 schedule. While I understand people’s frustration with the here and now, in my mind, having the owner of the club or the President of Hockey Operations come out and say their piece, is inconsequential.

I am far more interested in watching how Dallas Eakins and his players respond to the final forty-four games of the season. Do they fold their collective tents or are they going to try and fight their way out of what has quickly become the most disappointing and embarrassing year in franchise history. Another year of losing sucks but moving forward, it may have been a necessary evil.

One way or another, it should answer a lot of questions about the entire organization…both on and off the ice.
Posted by Oil Drop at 9:48:00 am